Envy is Your Friend

Well, I bet that’s a blog post title nobody’s ever used before. Before I get to that, though, here’s a link to an interview of me done by Lynne Bernfield, a Sarasota-area psychotherapist who runs an internet radio show about creative people. She was particularly interested in the fact that while I always wrote, I didn’t have the drive to be a novelist from a young age. Actually, I tried to avoid the path of being a fiction writer, but eventually it sort of chased me down. I found Lynne to be a perceptive and thoughtful interviewer, and am grateful to have the chance to tell my story.

On to today’s theme. Not long ago, my colleague Ryan G. Van Cleave asked if I’d give him some quotes for an article he was writing for The Writer, a magazine for, yep, writers. The article (in the August 2017 issue) was about writer’s envy, and Ryan interviewed several other authors about the subject as well.

Here’s what I said:
“For years, I couldn’t even read novels by living authors who were more successful than me, which was almost everybody. In those days if I read a novel by a dead guy or gal, I could appreciate it without stress, because at least I could mutter, upon closing the cover, ‘Haha, you’re dead and I’m not!’
“Although I’ve envied other writers (and still do), I know I’m envied sometimes. Whenever I realize someone is envious of me, I’m like, ‘You poor dumb shmuck, you have no idea that my life is a boiling cauldron of failure and anxiety.’ But I always act super-cool and confident.
“How to conquer envy? A confident front is half the answer. The other half is to commit to being the best you can possibly be; to do at least most of the things you want to do; to meet and even exceed the goals you set for your life. Throw regret to the dogs and meet every day without excuse or self-doubt.
“Also this: If we say it’s OK to be envious, envy loses its power. Because everybody is envious at times.”  [end of quote]

Seriously, the reason envy feels so bad is that we try to suppress it. After all, it’s one of the Seven Deadly Sins (per Western Christian canon, though it’s often listed as greed, which really isn’t the same). And then, because suppression is usually a lousy strategy, we feel guilty when we feel envious, which just makes it worse. We feel we shouldn’t be envious, so if we are envious, that makes us just extra crummy people. So we get down on ourselves at the same time we’re trying to fight the envy, which is just a loser road. 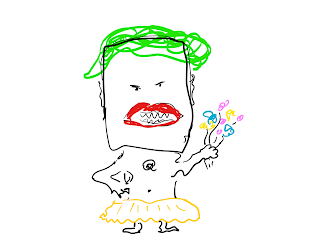 [Portrait of Envy by ES]

The correct way to approach the issue is to be OK with envy. Hey, welcome it! Make friends with it. As you can see from the photograph of Envy I managed to take when we met up recently, Envy might seem fearsome and ugly, but look—it’s holding a bouquet! The bouquet is a gift! And it’s for you! Now, how can that be bad? It can’t. It’s good! Envy really has no power at all—it’s just a big guy who wears lipstick and a little gold skirt and wants to be liked.

So my message today is welcome envy if it ever comes around—and all the while, keep working like hell on your own show.


If you'd like to receive this blog automatically as an email, look to the right, above my bio, and subscribe there. Thanks for looking in.
Posted by Elizabeth Sims at 12:17 PM