All of my New Year’s resolutions have to do with writing, publishing, and teaching, and all of them are basically “achieve more.” Oh, and plus “somehow make a million dollars.”

We are all the main character of our own lives. But let’s first talk about writing fiction. Part of what makes a character compelling is how they respond/react to change. Here are some ways to spark a character to change:

-        Give the outside world some agency. A layoff, an award, a subpoena, a snowstorm, a tantrum in the cafeteria, a market correction, a fortune cookie.
-        Give the body itself some agency. An infected tooth or toe, a false positive, a false negative, baldness, wrinkles, an inexplicable rush of lust or passion at first sight, new muscles from exercise, flab from too much beer, a forgotten wallet.
-        Create internal motivators. Realizations and resolutions occur when a character pauses to consider and decide—and possibly challenge beliefs and assumptions. Any of these things could involve years or seconds.
o   I just found a syringe with blood in it under my daughter’s bed.
o   I’ve let laziness creep into my life.
o   Hey, that guy just grabbed that woman’s purse!
o   I wonder what an injection of heroin feels like.
o   As soon as I paid for his silence, I was a different person.
By the way, the writing/reading website Booksie sent this along recently.
Zestful Writing says thanks, Booksie users of 2017!

Characters react, respond, grow, shrink, deceive others and themselves. When you remember that every character has the power of choice, rational or not, you have everything you need to create magic on the page.

So hey, it’s a new year. We all have the power of choice as well, with its potential to create magic in the real world. How about this as a simple resolution:

I will recognize and apply my power of choice to best benefit.


If you'd like to receive this blog automatically as an email, look to the right, above my bio, and subscribe there. Thanks for looking in.
Posted by Elizabeth Sims at 1:24 PM 4 comments:

Email ThisBlogThis!Share to TwitterShare to FacebookShare to Pinterest
Labels: Booksie, character motivation, the power of choice, Time for Change

The Edge, the Fail, the Fun?

Earlier this year a friend called to see if I’d be interested in writing some marketing copy for a product line she was working with. The money was attractive, the work wouldn’t take a lot of time, and I felt I could produce quality copy, so I said sure. (Not gonna mention product or company, cuz confidentiality.)

“We want to be edgier than we’ve been up to now,” she said. With that in mind I wrote up a few ideas. After she reviewed them, my friend seemed concerned that the material was too edgy.

I said, “Well, you don’t really know where the edge is until you go over it and have a fail.” The concept wasn’t new, but I felt it worth mentioning. “Therefore,” I went on, “you have to be ready to accept and tolerate a failure. Then you know.”

Push through to failure, learn from the fail, let the fail suggest and help shape the next thing—early humans were doing this before they could paint horses on cave walls. But I got to thinking about writing, and being in the writing biz. For us as for almost everybody, it’s easier to avoid risk than court it. If a story succeeds, why not just write that same one—essentially—over and over? Imitate what others are doing. If you see something that looks like an edge, pull back. Why not watch and wait, and let somebody else go over it first?

Because if they find an air current and start to soar, you’ll be standing there wishing you’d had the guts. If they plunge down onto the rocks, you might feel relieved, but sooner or later you know they’re gonna crawl back up to the top. They’ll be wiser, plus they’ll have a tale of survival to tell…and perhaps monetize. 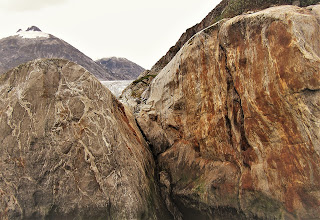 [Where are the edges here? Hm, maybe they depend on one's point of view… [photo by ES]]

The edge isn’t in the same place for everybody. And there are different classes and categories of edges, if you think about it. And hey, a scary edge could turn out to be false when you really get close, and you see there’s just a little gap that you can leap easily, or build a little bridge with yonder log. We all know these things deep down.

What’s the definition of edge, for the likes of us? It’s the place beyond which your end users will not go. The place where you start to lose more readers than you gain. That might be OK, depending on what you want. Edges are there to tempt us and teach us.

Have you ever known anyone to live a fail-free life?

Can you have fun testing an edge?

Is this all metaphor, or is it real?


If you'd like to receive this blog automatically as an email, look to the right, above my bio, and subscribe there. Thanks for looking in.
Posted by Elizabeth Sims at 2:03 PM 4 comments:

Email ThisBlogThis!Share to TwitterShare to FacebookShare to Pinterest
Labels: blood on the rocks, fun, marketing copy, The Edge, the Fail, the Fun?

What My Students Taught Me

As you may know, I’ve been teaching short story writing at Ringling College of Art and Design. Fall term is over; I’m calculating final grades for my class of second- and fourth-year students.

It often happens, and I feel it should happen, that a teacher learns from her students. I certainly have learned a bunch from the private writing clients I’ve worked with, so I expected to come away with lessons from these 16 young people. Here are some:

·       The students at Ringling seem to be more mature and self-directed than the ones at other schools who get bad press with their public tantrums about political and social issues. I believe this is because the Ringling application process is pretty grueling, meaning they really have to know what they want. They want to develop their talent concretely and specifically, and they want to explore other possibilities, with the intention of making their independent way in the world. While they care about political and social issues, their focus is on the business of getting an education.
·       Students whose first language was not English were, at first, worrisome to me, as they were unfamiliar with the Western literary canon, idiomatic American English, and indeed large swaths of American and Western culture. I was concerned that their relatively limited experience with English would hamper their expressiveness. I was happily wrong. Their storytelling skills were no worse, in general, than the native English speakers. Their grammar and vocabulary weren’t very advanced, but they made up for it by tapping into their own culture and language structures, with the results being, often, beautiful, poetic, and unique. At times their work was even more inventive than native English speakers, because they figured out word, phrase, and sentence constructions on their own:
o   A dog leash is a ‘pet rope.’
o   The moon isn’t at its apex, it’s ‘right at the top of the sky.’
o   A frightened man isn’t pale, he ‘looks like a peeled onion.’
o   ‘Her eyes swallowed ashes and spitted death.’
·       When you’re standing before a class of art students, talking and writing things on the board and answering questions, you realize that sometimes they’re taking notes, and other times they’re sketching you.
·       And sometimes they’re making other art, as in the photo below. “My parting gift to you,” a student said. 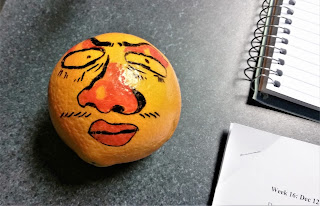 [The Florida art school version of ‘an apple for the teacher.’ Thank you, FC. Photo by ES]

·       In writing their stories, some students wanted to go big, and they wrote outlandish ideas that didn’t connect. I realized that going deep with your characters first is the only thing that can lay proper groundwork for big splashy drama. Because if readers don’t know the characters deeply, all the gunpowder in the world—or all the supernatural outer-space mind control in the galaxy—can’t make them engage and care.
·       In spite of their talent, there was a lot about story my students didn’t know, and a lot about how to read stories that they didn’t know. If I teach this class again, I’ll spend more time helping them interpret what they read.
·       Making art and commerce work together, i.e. doing what you love, developing it, and coaxing it to pay well—that’s a fine outcome for these students to strive after.
·       And for us writers too, no?


If you'd like to receive this blog automatically as an email, look to the right, above my bio, and subscribe there. Thanks for looking in.
Posted by Elizabeth Sims at 1:59 PM 6 comments:

Email ThisBlogThis!Share to TwitterShare to FacebookShare to Pinterest
Labels: an orange for the teacher, coaxing art to pay well, reading skills, Ringling College of Art and Design, story skills, What My Students Taught Me

Today is known in America as Pearl Harbor Day, or the anniversary of the Japanese attack on the U.S. Navy base at Pearl Harbor, Hawaii, on December 7, 1941. I’m thinking about the entirety of World War II, from the Holocaust and battles in Europe to the Pacific theater and the atomic bombs. 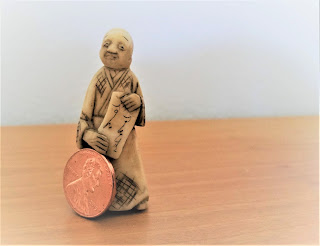 [A Japanese ivory netsuke, or toggle button, brought home by my uncle, who served in the war. Penny for scale. I have no idea what the writing on the man’s tablet means. My mother seemed to think it had something to do with money or accounting. If you can translate, please let me know! Photo by ES.]

And I’m remembering something a friend told me about violence, specifically how generations are affected by violence. She had worked with Holocaust survivors and their progeny, and she said, “The direct survivors are not as angry as their descendants. I think the imagined terror is worse than the reality.”


If you'd like to receive this blog automatically as an email, look to the right, above my bio, and subscribe there. Thanks for looking in.
Posted by Elizabeth Sims at 12:52 PM 4 comments: