What's the difference between a bad writer, a good writer, and a great writer?


When I was a college freshman, my English professor said, "Lots of young people want to write. But before you write, you must first have something to say."


The message was: The yearning to write is not sufficient to produce something worthwhile to read.


At the time, I thought that was an extremely wise insight. 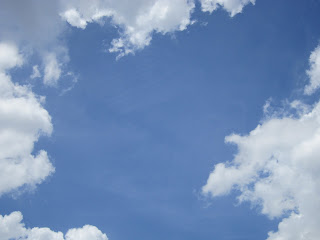 Later, having written a book or two, I realized that great writers do not write because they have something to say. They write in order to find out something, or to get at something. Writing like that can be as thrilling for the reader as for the writer. You can get fire and ice that way.


Moreover, even if you begin a piece of writing knowing quite exactly what you want to say, if you’re relaxed about it you’ll find your heartbrain going off in interesting, unexpected directions. And if you begin with nothing but your pencil and a sense of vague desperation, you’ll eventually find yourself focusing and sharpening on something worthwhile, and smiling as you go.


I've learned that way too many writers get confused and think they're preachers.


Great writers draw on their deepest courage and humility: "Mean people are the likes of you and me."


Nobody needs a preacher. Just shed light. Great writing is a journey of discovery, and it can be undertaken by anybody.

[Photo info: I took this shot of the sky over Sarasota, Florida.]


If you'd like to receive this blog automatically as an email, look to the right, above my bio, and subscribe there. Thanks for looking in.
Posted by Elizabeth Sims at 11:14 AM 4 comments:

Why not? Two reasons:

One, the very act of striving for perfection hampers free expression. I mean, that's true by definition: since perfection is impossible on this earth—given how molecules sort of squish around all over the place and all, even those of precise instruments such as laser beams and Stradivarius violins—it follows that striving for the impossible is futile. And futile effort cannot result in free, fullhearted creativity, no way.

On some level our heartbrain knows this. If we consciously try for perfection—that is, the impossible—our heartbrain will quietly but forcefully go to war against that. Result: anxiety, doubt, fear, and crappy work.

Two, an audience who can tell junk from real art will intuitively reject any product of a perfectionistic artist. Another term for perfectionist is control freak. The product of such a person will be brightly polished and free from cosmetic mistakes. As such, it will be pretty and it will fool lunkheads who will probably buy it. And it will have no soul.

Do not feed the lunkheads.

Go after the audience you want—that is, an audience who will appreciate you and will stick with you—by forgetting perfection and going at it headlong, reckless, and grinning like a maniac.

If you'd like to receive this blog automatically as an email, look to the right, above my bio, and subscribe there. Thanks for looking in.

Posted by Elizabeth Sims at 10:08 AM No comments:

Recently I was at a party and spent some time talking with and getting to know a firefighter. Given my early experience as a reporter, I'm comfortable asking probing questions of strangers.


Since this firefighter was female, I indulged my curiosity about the aspects of the job that require physical strength. She gave her height and weight: a couple of inches shorter than me, and only five pounds heavier, definitely not a thick chick. Yet she said she could deadlift 225 pounds, which just astounded me. (By contrast, I can probably deadlift forty pounds max, unless I have to lift a car off of a baby, in which case I would run like hell to find somebody with muscles.) (A deadlift is where the barbell starts on the ground, and you bend down and lift it with straight arms until your back is straight, which makes the bar end up around your knees. Lower it and you've completed one rep.)


The firefighter said that her strength strategy, to keep up with the guys, was to acknowledge that she couldn't lift as much as most male firefighters at one time, but she had trained so that she could repeat lifting heavy weights more times than most of the male firefighters. "So I can't lift as much, but I can repeat and endure as long or longer than they can, and a lot of the job is endurance, rather than explosive strength." 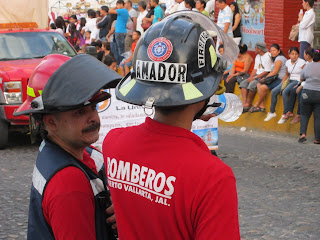 (OK, I didn't have a picture of a female firefighter. These guys work putting out flames in Puerto Vallarta, Mexico. Don't you love the Spanish word for them?: Bomberos!)
Then I asked the firefighter how she copes with the emotional vicissitudes of the job, thinking of the broken bodies she deals with, being that firefighters do a lot of EMT work as well.


And I realized that that's a huge difference, one I never thought about. Certainly the job can be traumatizing, but it's not like I thought.


She went on, "And if somebody's dead, they're dead, and it's all over for them. Nothing's going on."


What about the survivors? I wondered how she deals with their grief and shock.


In other words, they don't stick around.


Because, really, the only way they can survive is to not become emotionally involved in the dramatic, often defining moments, of other people's lives.


What does this have to do with writing?


We must be like them in that when the shit goes down, we have to jump in our truck and rush to it. But of course we must create the shit that goes down, and we must be different from firefighters. We must stick around.


We must be there for the tough stuff, we must be deeply involved in it, we must not gloss over trouble, agony, difficulty. We must be there deeply because we want our readers to be there deeply. So we have to show the leg breaking. The heart breaking. The bullet piercing the flesh, the fire licking the Picasso, the floodwater inching toward the nostrils. And we must show these things as vividly as possible, discomfort bedammed.


Of course, we as writers also get to indulge in the flip side: We get to be there for the ecstasy, and we must not only let our readers know it's happening, we must portray it as deeply as we portray the pain.


Sometimes this is even more a challenge than portraying suffering! Why is that? I think it's because suffering is drama, while joy is…well, joy is nice.


If you'd like to receive this blog automatically as an email, look to the right, above my bio, and subscribe there. Thanks for looking in.
Posted by Elizabeth Sims at 10:14 AM 4 comments:

The Curse of Vocabulary

A friend of mine once found himself in civil court, defending himself against a lawsuit in front of a jury. Before he took the witness stand, his lawyer told him, "Whatever you do, talk plainly. Jurors don't like witnesses who use fancy words."


On the stand, the lawyer's first question was, "And how did you feel when you found out you were being sued?"


My friend exclaimed, "I was flummoxed!"


He prevailed against the suit in spite of that, but he said the look on his lawyer's face still haunts him.


I remembered that story when I went into a hardware store in a rural area not long ago. I wanted a particular tool that I'd noticed for sale elsewhere. I couldn't find one on the shelves so I asked for help. Two clerks, good ole boys both, came to my aid, and we scanned a large display of tools, trying to find what I wanted.


I said, "I kind of can't believe you guys don't have these; they're so….so…" and I paused, because the word I wanted to use was 'ubiquitous,' but I looked at these country guys and I thought, "OK, do not say 'ubiquitous.' Think of any word but 'ubiquitous.'"


The guys waited politely for me to finish my sentence, until finally I accepted my fate and came out with it: "ubiquitous!"


They looked at me in silence, then after a moment we all decided I probably didn't need that tool anyway.


For a writer, a large vocabulary is almost always a blessing. But at times it does feel like the opposite. I knew that for sure as I got into my car in that hardware store parking lot, cursing like a gynecomorphous canis lupus familiarus.
Posted by Elizabeth Sims at 2:34 PM 2 comments: