I Say I Want a Resolution

The best resolution for the New Year is, of course, to keep all the old ones. Herewith my top two: 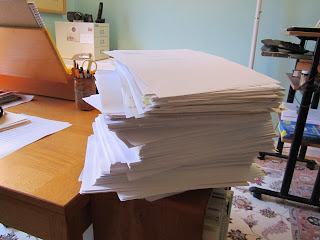 1) Practice breath awareness as much as possible.

To post your ideas / comments, all of which I read and try to respond to, click below where it says, 'No Comments,' or '2 Comments,' or whatever.


If you'd like to receive this blog automatically as an email, look to the right, above my bio, and subscribe there. Thanks for looking in.
Posted by Elizabeth Sims at 1:18 PM 11 comments:

Email ThisBlogThis!Share to TwitterShare to FacebookShare to Pinterest
Labels: breath awareness, I Say I Want a Resolution, new blog post

A Real Gift for a Writer

I hope there are lots of people out there who are thinking: Let's see, my son/daughter/sister/brother/friend is a writer. In light of that, what would a good Christmas/Hanukkah/Kwanzaa/Druid gift be?

Besides the obvious (a copy of You've Got a Book in You; a new pen), the best gift you can give a writer is time. Yeah, baby! Of course time cannot be given any more than health can, but opportunity for uninterrupted time devoted to a single task can be. How about an hour a day of quiet time with no resentment attached? Or a couple of days—better still, a week—at a motel in another town where intense work could get done? Or a course in time management.

I've always dreamed of getting passage on a transoceanic freighter where I could get the better part of a book done. In the middle of the Pacific, you can't hear your cell phone…. And there are no excuses. 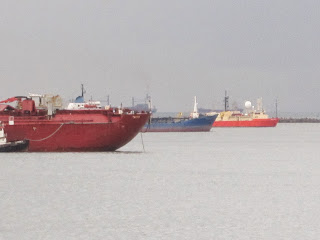 If you give the gift of time to a writer, watch their reaction. Unbridled joy? Dread? If it's dread, so much the more reason for having given the gift.

Come to think of it, time is a gift that reveals more about the recipient than the giver, isn't it?

May your holiday season be filled with good cheer, love, and plenty of ink.

[Photo by ES]
Tell me what you think! To post your ideas / comments, all of which I read and try to respond to, click below where it says, 'No Comments,' or '2 Comments,' or whatever.
If you'd like to receive this blog automatically as an email, look to the right, above my bio, and subscribe there. Thanks for looking in.

Email ThisBlogThis!Share to TwitterShare to FacebookShare to Pinterest
Labels: A Real Gift for a Writer, holidays, new blog post, time

Your Ideas Are Your Capital

The other day I was listening to an aspiring writer tell me about the novel he's writing. He mentioned that he had ideas for further novels, but was unsure whether to spend the effort developing them before he saw whether agents / editors / readers would be interested in this first book. He asked what I thought.

I told him that in my own case, ideas have broken through for me before a finished work did. Although I sold my first four novels to a publisher myself, it wasn't a novel that got me representation. Hungry for a bigger audience, I set out to write a novel good enough to score me a hardcover contract with a big house. I wrote the novel and shopped it around to agents. One read it and called me up. "You're obviously a terrific writer," she said, "but I just don't think I can sell this book. What other ideas do you have?" I told her a few, and she asked me to develop them a little more on paper. I did so, and she got back to me saying, "I really like this one about the actress. If you can write that one, I think I can sell it." Which is what happened, and The Actress debuted in hardcover with Minotaur Books (MacMillan). I've been with Cameron McClure at the Donald Maass Agency ever since.

The same thing happened the first time I approached Writer's Digest magazine. I wrote up a detailed inquiry about an article I'd like to write for them, and decided at the last minute to throw in a few other ideas at the bottom, just in case. The editor got back to me and said in a nice way that my main idea sucked, but they'd like me to write an article based on one of the little ones in the last paragraph. So I did, and have written more than 30 feature articles for them to date.

Which, I realized, exactly parallels something I learned in Hollywood. A few years ago I flew to Los Angeles to meet with a television executive to discuss making my first mystery series, the Lillian Byrd books, into a cable TV series. Over a meal at a hip restaurant in West Hollywood (I felt existentially enviable) we talked about my books in detail, how the series might be structured, and even threw around casting ideas.

Then the executive asked if I'd be willing to be a writer for the show.

"Sure," I said, "but I thought you guys usually just bought the material and had other people write the scripts."

She said, "You don't understand. It's not so much that we want this material you've written. We want your talent; we want YOU."

She explained, "You were thinking about how the movies work. The movies want a script. TV wants a writer."

So there you have it, aspiring authors. Write up all of your best ideas and have them in your back pocket. Get started on that next novel! Come the time to start putting your first baby out into the world, your newer stuff just might be instrumental in your breakthrough.

Special notes for this week:

Local friends, check out the Florida Writer's Association Bradenton Mini-Conference in January, just in time for that New Year's writing resolution: http://www.floridawriters.net/FWA_Upcoming_Events.html
I'll be there doing a workshop and a writing-prompts session. Check out the other faculty; some pretty accomplished people will be there, all with the goal of helping you. I guarantee you'll deepen your talent and have fun doing it.

And to follow up on last weeks' post: I've received my package of Dragon software and will set it up soon. The shoulder is improving with drugs and therapy.

Tell me what you think! To post your ideas / comments, all of which I read and try to respond to, click below where it says, 'No Comments,' or '2 Comments,' or whatever.


If you'd like to receive this blog automatically as an email, look to the right, above my bio, and subscribe there. Thanks for looking in.
Posted by Elizabeth Sims at 11:51 AM 4 comments:

An Arm to Stand On

When you're a writer you tend to take your physical ability to write for granted. It's shocking when that skill becomes compromised.

Earlier this year I caught a finger in a steel door. The wound was small yet impressively gory, and because of it my ability to write with a pen and type was impaired for a few days.

That got me to remembering an episode in Ernest Hemingway's life, when he broke his arm in a car accident in Montana in 1930. It was his dominant arm, and they had to operate (using kangaroo tendons to bind the pieces of bone together!), and it took many weeks to heal. With the arm immobilized, he couldn't write with any ease—longhand with his left was practically impossible, and typing one-handed was cumbersome, slow, and distracting—and he became depressed. At that time of his life, that was unlike him.

I've thought about all this quite a bit more lately, experiencing some disability in my dominant arm. Sparing you the fascinating, innumerable details, I have a complete tear in the shoulder cartilage that holds my arm on, plus a bunch of  inflammation.

My chiropractor, viewing the dramatic MRI, assured me I need surgery, and I spent weeks reading stuff on line and living in growing fear of the months-long process of post-surgical immobilization and rehabilitation. I made lists of things to do pre-surgery (buy pull-up pants, replace batteries in smoke detectors, go to the hair salon, finish all Christmas prep) and worried some more.

But when I got in to see the surgeon, he gave me a reprieve: with drugs and therapy, I might regain an acceptable level of function without having an operation that cannot be guaranteed to succeed anyway.

By a stroke of luck and faith, I hooked up with a wizard physical therapist who has worked behind the scenes with elite athletes and ordinary joes, rehabbing grievous injuries and restoring amazing function. We've just begun, and I'm encouraged. Am typing this with both hands!

But I did go ahead and order some voice-recognition software (Dragon). Because even though I'm able to write normally for the moment, I realized the great truth of being able-bodied: You never know. Moreover, I've wondered what it would be like to write with my vocal cords, so to speak. I'll give it a try.

Which feeds into the issue of productivity. These days, given the multitude of demands on authors' time, what with social media, self-promo, and all that bullshit, authors are increasingly concerned with productivity in the time they DO allocate for actual writing. And it's a given that the bigger your backlist is, the better your sales, the better your income. Obviously we can talk faster than we can write—so is that the future of composition?

Output alone won't cut it, of course. Yet on the other hand, it does, for many writers. Some put out hurried, half-done crap just for the sake of getting another title out there.

This will be an interesting trip.

Tell me what you think! To post your ideas / comments, all of which I read and try to respond to, click below where it says, 'No Comments,' or '2 Comments,' or whatever.


If you'd like to receive this blog automatically as an email, look to the right, above my bio, and subscribe there. Thanks for looking in.