That is the second paragraph of "Wild Saturday," a short story by Joyce Carol Oates, one of my literary heroes. It was first published in the September, 1970 issue of, unbelievably now, Mademoiselle magazine. Oates had burst on the literary scene as a very young woman, and won the National Book Award with her novel THEM in the same year this story was published. She was 32. 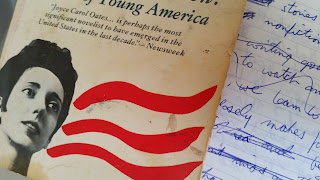 When one reads for pleasure, whether one is a writer or not, the way to learn from another author is to ask, always, these two questions: What is really going on? What am I being told or shown?

What's so special about that paragraph from Oates's story? Nothing and everything. It shows us a young boy being handed off from Custody Mom to Weekend Dad. The breakup of the marriage was acrimonious. How do we know this? If we're paying close attention, we notice that the parents are so estranged that Dad doesn't even come up to the front door to greet his ex-wife and collect his son. Is he afraid, ashamed, a wuss? These questions might crop up in our readerly minds. And as we read further, we might be on the lookout for answers.

If we hadn't caught any significance to dad-on-sidewalk, we're told more by the mother's "worried angry kiss." Yes, the dad could be a little leery of his ex's suspicion and fury, which is perhaps well justified. We might already be developing a feeling of uh-oh.

Because "the week has exploded white-hot" just now, and the mom evidently has reason to be worried because this isn't the first time the boy has gone off with his father on the weekend. We know this because the situation is presented as if routine, not the first time.

And because this is the beginning of a story, we know we're going to get a story, and the title of the story has the word 'wild' in it, and we know that the author is Joyce Carol Oates, and because we know her, we know that this will almost certainly be a harrowing, spellbinding trip—especially if we read it with fine attention.

That is how good authors work: with economy and attention to every detail, to make the most of every word. Do you like this? I'd like to do more of these if you think it would be interesting/helpful. To post, click below where it says, 'No Comments,' or '2 Comments,' or whatever.


If you'd like to receive this blog automatically as an email, look to the right, above my bio, and subscribe there. Thanks for looking in.
Posted by Elizabeth Sims at 1:05 PM