I started to write a few paragraphs about the terrorist massacre in Orlando, but others have said everything already, and I need to keep this blog about what it’s about: zestful writing, zestful living. In that spirit I wish to tell you the results of a small choice I made yesterday.

I’m in my hometown of Detroit, on family business. (Local friends, don’t hate me for not getting in touch. Very tight timelines. I love you.)  Marcia and I are staying with a friend in the leafy, low-crime, northern suburbs. I happen to be under contract for a new article for Writer’s Digest magazine, so yesterday when I had a few hours to myself, I decided to start work on it.

My protocol for developing a new article is to hang out in as large a library as is available to me, brainstorm initial notes, and do research in the stacks. Yesterday my choice was to go around the corner to a nice suburban library, or take half an hour and drive down the crumbling Woodward corridor to the Detroit Public Library.

I tried to convince myself to stay north of Eight Mile, but the pull of the old cultural center was too great. They call the area that comprises Wayne State University (where I got my master’s), the main public library, the Detroit Institute of Arts, and assorted newer museums the Cultural Center. I knew I’d be disappointed in myself if I didn’t go to the DPL, for old time’s sake if nothing else. But I knew in my heart it would be worth it. The trip cost extra time, trouble, and, to be honest, anxiety. You just can’t grasp the enormity of the city’s decay via web posts and pictures. I stopped to take a couple of ruin-porn photos en route, steeling myself to be this white lady getting out of a twenty-year-old Lexus and photographing bombed-out buildings with only black folks around. Needless to say, no one bothered me.

En route I found the whole of Woodward Avenue to be blocked off: all seven lanes, with police barricades and mounted officers. I slowed down and saw the cathedral off to the left, remembered I’d listened to the radio yesterday, and thought: right, Gordie Howe’s funeral. So I found a parking place in the Boston-Edison district and walked up to see. Nobody who wasn’t invited could get in to the funeral mass of the hockey legend, of course, so I hung out on the fringes, across the street with some photographers and a few citizens who showed up to honor the sportsman.

So yeah: They were broadcasting the mass outside, so we could hear everything. I noticed that the camera guys were positioned directly across from the church main doors, and realized that’s the correct spot to get the classic casket-being-carried-out shot. Chatted up the fans, who had their Gordie stories. Chatted up the cops, thanked them for serving. Watched the mounted officers get down next to their trailer, water their horses, and pour coffee for themselves.

Got back in the car, fought the construction along the rest of Woodward, found a parking spot near the library, figured out the new parking-pay kiosk, went in, and got a spot in one of the reading rooms: 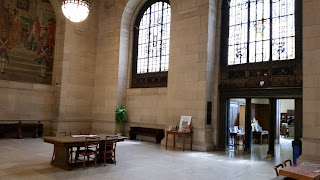 It’s the coolest library I’ve ever been in, and I’ve been in a lot of major ones. As soon as I established my campsite, my breathing slowed down, and I got to work making notes and thinking. Who wouldn’t feel completely at peace in a place like that? Who wouldn’t have wanted to stumble upon a little piece of Detroit history along the way?

There’s a lot to be experienced along the fringes.


If you'd like to receive this blog automatically as an email, look to the right, above my bio, and subscribe there. Thanks for looking in.
Posted by Elizabeth Sims at 10:24 AM