A Deeper Shade of Flavor

I love learning something more profoundly than I originally learned it. A reader helped me recently, and I want to share the learning with you.

If you keep track of Writer’s Digest magazine, you noticed a piece on dialogue by me in the May-June 2018 edition. It’s actually an excerpt from You’ve Got a Book in You, where I discuss how to sharpen your dialogue skills by tuning in to the natural speech around us. I mention reading plays, and included this little story:
[excerpt begins] Not long ago when I read a play by the extremely talented Martin McDonagh, The Beauty Queen of Leenane, I kept noticing the word so at the end of characters’ lines, and I was like, I guess that’s an Irish-ism. And it sort of is, but sometime later I heard myself say so at the end of sentences sometimes, like, “I already ate, so.” Which is a trailing off with a precise meaning: “So I won’t go along to lunch with you guys.”
I heard myself say that and a bell rang in my head, and I remembered those plays where sentences ended in so, and I realized, “I do that, it’s a modernism, it isn’t totally just an Irish-ism.” And I understood another little thing about realistic dialogue there. [excerpt ends]
And then I got this email from a writer and reader in a far-off land!:
[email begins] My name is Bronwen, I’m a Toronto-based writer. I read your article on dialogue in this month’s Writer’s Digest and really enjoyed it.
I’m writing to you with a little tidbit which you may or may not find interesting. I grew up in Ireland but moved away, first to the UK and then Canada, about 12 years ago and as a writer and word nerd have often thought about how the Irish speak English, including the use of the word “so”.
Irish people don’t use it at the end of a sentence as an American / Canadian might, letting the sentence trail off (as in, “I already ate, so... [I won’t join you for dinner]”) but rather as another way of saying “in that case”. For example:
“We’re going to be late if we walk.”
“Let’s get the bus so.”
“We should eat that chicken tonight.”
“I’ll take it out of the freezer so.”
Anyway, I just thought I would share -- you seem like a fellow word nerd who would find such an idiomatic way of speaking interesting.
[email ends] [Bronwen, thank you for giving me permission to share that!]
And I went back and looked through that play to try to prove it, and Bronwen is right! Here are a few lines:
[excerpt from The Beauty Queen of Leenane begins]
Maureen: You don’t give it a good enough stir is what you don’t do.
Mag: I gave it a good enough stir and there was still lumps.
Maureen: You probably pour the water in too fast so. What it says on the box, you’re supposed to ease it in. [excerpt ends] 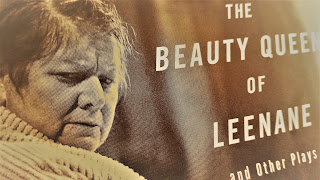 If you replace Maureen’s “so” with “in that case” you have the exact meaning Bronwen was talking about. I hadn’t understood it fully before.

And there, ya see? This is why it’s so great to connect with writers and readers all over the place, who take language seriously and continually strive to grasp and master it! Happy times. Word nerds, unite! Talk to me about this stuff.

Before signing off, here are a couple more items from friends:

And: Here is information, forwarded by novelist Cheryl Head, about a new GCLS Bridge Builder scholarship for women of color.

What do you think? Do you have a story to share about the finer points of vernacular word meanings? To post, click below where it says, ‘No Comments,’ or ‘2 Comments,’ or whatever.
If you’d like to receive this blog automatically as an email, look to the right, above my bio, and subscribe there. Thanks for looking in.
Posted by Elizabeth Sims at 1:53 PM

Email ThisBlogThis!Share to TwitterShare to FacebookShare to Pinterest
Labels: A Deeper Shade of Flavor, Amelia Stein, Anna Manahan, dialogue, friend Bronwen, Martin McDonagh, The Beauty Queen of Leenane, Writer's Digest, You've Got a Book in You