Getting the Words More Better

I bet you already know some of these, but here’s a nosegay of words that commonly get misunderstood and therefore misused, along with the info you need to do it right. Between the internet and various magazines I get, I’ve seen all of these used wrong within the last month. And all of the wrong usages are creeping into popularity. This is upsetting to me, and I know it’s a losing battle, but this is my damn blog, and I’m going to stand my ground. I invite you to stand with me.

A poisonous substance is something that makes you sick or kills you if you ingest it. Venom is a substance injected into you by an animal, like some snakes or spiders. Yet so many people are using ‘poisonous’ to describe venomous creatures that the usage is showing up as a secondary definition in dictionaries.

Again, loan and lend are commonly considered synonyms. But loan is a noun: “It was a loan of five thousand dollars.” Lend is the verb form: “She wanted to lend him the money, but he wouldn’t take it.” Lend is the simple form, while lent is past tense.

The muscle at the front of the human upper arm is the biceps, not bicep. The muscle is anchored at the elbow by a single tendon, then the muscle splits in two (hence the prefix ‘bi’) and is anchored at the shoulder by two tendons. Biceps. It is a plural form. If you’re thinking it must be the same with triceps and quadriceps, you would be right. 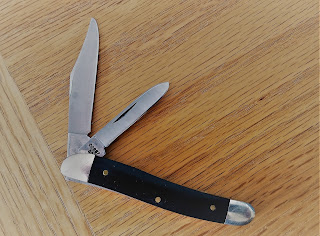 [A Case knife with clip and pen blades. Photo by ES.]

In olden times when writers used quill pens, they fashioned the points with a small knife blade, maybe an inch or so long. This blade was usually fixed in a handle and was part of most deskscapes. It was a penknife: a knife used to make pens. Sometimes penknives were made as tiny folding knives, often seen at the end of pocket-watch chains. A jackknife is a knife with a folding blade, also known as a pocketknife. Some jackknives feature a small blade, called by knifemakers a pen blade, along with a larger blade.

Yet many writers are now calling any folding knife a penknife. I believe that’s because they think it is a more precise or educated-sounding term. It is not.

Thank you for joining me in the pursuit of linguistic precision.

What incorrect or sloppy word usages bug you? To post, click below where it says, 'No Comments,' or '2 Comments,' or whatever.
If you'd like to receive this blog automatically as an email, look to the right, above my bio, and subscribe there. Thanks for looking in.
Posted by Elizabeth Sims at 11:52 AM