OK, so I promised to follow up on Zestful blog post #255, “Awards Versus Happiness.” Marcia and I went to Tallahassee last Thur-Sat to attend the Florida Book Awards dinner and participate in other very nice events: a morning-after breakfast at the Midtown Reader and a panel talk and signing at Word of South, an annual music/books festival at the pretty fabulous Cascades Park.

My most burning question before the awards dinner was whether we would just be handed our medals, or whether the bling would be given Olympics-style. Thankfully, we got handed a little box with our medal in it along with our name tags and drink tickets at check-in. No stress. 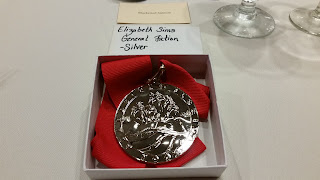 [For my standalone novel, Crimes in a Second Language. Sorry if you saw this already on FB.]
I was glad we went; it seems the awards are a bigger deal than I thought, and the evening was swankier than I expected. Lots of very smart and accomplished people in the room, all interested in, and many devoted to, quality writing, research, and expression. And given that Florida State University is in charge, meaning actual paid staff handle things, you could count on things going smoothly, and somebody there to fix problems right away. Nothing against events run exclusively by volunteers. God bless them. I have volunteered at events. But you know what I mean.

OK, based on having attended many awards dinners, and received prizes at a few, here’s my survival guide. Do these things and you are 75 percent less likely to lie awake later, silently insulting yourself:

·       Arrive sober. If you’re a social drinker, consume one drink immediately, which will loosen you up during mix and mingle. Then nurse the next one for the rest of the evening, so you don’t look like a lush. Everybody at your table counts everybody’s drinks.
·       For non-drinkers, you have far less to worry about. You probably don’t know this, but you are envied by social drinkers in these situations. For instance, if a drinker says something they later think sounded stupid, they’re like, “Oh, hell, I shouldn’t have had that wine.” But in their heart of hearts they know it was just them. Non-drinkers don’t have to do any mental/emotional gymnastics.
·       Realize that everybody is a little or a lot nervous. If you act cool, that helps others relax and makes you look good. Act cool by being friendly. My opening line was, “Hi. Who are you and what did you win?” which always drew a grateful smile and started a convo. Nobody expects you to know who everybody is and what they did. Another good one is, “Hi. What’s your role here tonight?” Or, “What are you up for?”
·       Try to be attentive to your spouse/partner, introduce them around, and mention their accomplishments at dinner. Often the spouses have the most interesting stories!
·       Write out your remarks in advance. I consider this a no-brainer, but have witnessed unprepared speakers get flustered. And you’re there because of your work, so make your comments mostly about that, rather than yourself. (FWIW, my remarks for FBA are reproduced below.)
·       Tell your table-mates they did a good job when the come back from the dais. Everybody appreciates this.
·       If it’s the kind of uncivilized event where you don’t know who won what until it’s announced, steel yourself for disappointment. I hate events like this. Needless to say, if you lose, try to congratulate the winners. The key is to remember this too shall pass; there’s always next time. If you won this time, you might lose next time, and the other way around.
·       Thank everybody as the evening unfolds, and don’t forget the wait staff. Put a buck or two into the bartender’s cup.
·       These days everybody’s pretty cool with posting selfies, etc. on social media during events. So post away, but avoid looking like a twelve-year-old by fiddling on your phone only a little bit.
·       Be neither the first nor the last to leave.
·       Send follow-up emails of thanks to the organizers, etc. Handwritten notes are great too!

For the heck of it, here’s what I said when called up to the dais that evening:

It’s great to be in the winner’s circle, with so many talented authors. Thank you to the Florida Book Awards and all the organizers, Florida State University, and all the affiliates.

Thank you to the judges in my category—Chris, Jennifer, Dianna. Having been a judge for literary contests, I know it’s a difficult task, and largely a thankless one.

Moreover, I’m extremely gratified that the judges took CRIMES IN A SECOND LANGUAGE seriously: a book I released under my own imprint, Spruce Park Press. I have been published by a Big Five house, Macmillan, and by smaller publishers. But there have been massive changes in how books come to market, and I appreciate this organization’s recognition of that.

CRIMES IN A SECOND LANGUAGE is a standalone novel, apart from my two series. It was prompted by a true situation. By the way, it is not a book about Florida. It’s set in Los Angeles. I wanted to bring in the flavor of all that Hollywood hustle, and because I’ve spent a lot of time in Los Angeles with family, and with friends in show business. My uncle and aunt lived near LA, and they were retired, and they employed a young housecleaner who had been recommended to them by a neighbor. The cleaner, Maria, was from Mexico, and she didn’t speak English. And my aunt and uncle didn’t speak Spanish, and so every time Aunt Tracy needed to tell Maria something in particular, she had to go get the neighbor who spoke Spanish.

One day Aunt Tracy, who had been a kindergarten teacher, asked Maria if she’d like to learn English. Si! So Maria started coming one day a week to clean, and another day to learn. As soon as Aunt Tracy started teaching her English, she discovered that not only did Maria not know English, she knew very little about anything else, because she had only gone to school in Mexico through the fifth grade. So then Aunt Tracy started teaching regular school to Maria. Elementary subjects. Because of this bonding over learning, those two women became lifelong friends.

HOWEVER. This teaching and learning did not sit at all well with Maria’s husband, Jose. He barely spoke English, and he didn’t want Maria to get ahead of him. Aunt Tracy offered to teach him too, but he said no. And he tried to get Maria to stop learning.

And when I heard about this, and I met Maria, I started thinking, well, what if there was a more nefarious reason that Jose didn’t want his wife getting more educated? What if he was up to something seriously criminal, yes, and what if Maria knowing how to read and write English could be dangerous for him? And that set me onto a plot where (spoiler!) the Jose character is much more sophisticated and educated than he let on. I brought in Hollywood in the form of a film-producer neighbor, and an aspiring author who writes technical manuals about machines that make airplane parts, and I introduced themes of corporate sabotage, money, greed, idealism, and true friendship. Another spoiler: the two women in the story become lifelong friends.

And I had a lot of fun with it. Oh, and one last thank-you, to my supportive and wonderful wife Marcia.

Thank you very much.]

Do you have an awards-dinner anecdote to share? Was this post interesting/potentially helpful? To comment, click below where it says, 'No Comments,' or '2 Comments,' or whatever.
If you'd like to receive this blog automatically as an email, look to the right, above my bio, and subscribe there. Thanks for looking in.