The Murderer at the Next Pump

The other day while shopping at the drugstore another customer passed by me, and he gave me the deep creeps. Instead of avoiding eye contact or turning away as I usually do, I took a better look. He seemed not to have taken particular notice of me; it was just the vibe. This guy’s aura was dark and flat. 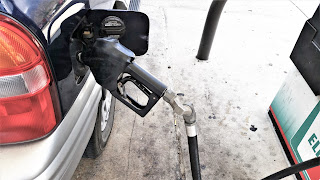 And I was reminded of the fact that many crimes, many murders, go unsolved, and murderers walk among us. Murderers buy groceries and gas up their cars and go to work and the movies. (I keep baby wipes in my car’s console, for cleaning my hands after gassing up, specifically because I don’t want murderer molecules to stay on me. You laugh. But you’ll be lookin’ at your hand different now, when you put that nozzle back, won’t you, my pet? Yes, you will.) No doubt most of us have come into contact with murderers without knowing it. Sometimes we get closer than that.

Marcia’s cousin was murdered, the crime and subsequent cover-up arranged by the cousin’s estranged husband. (Everybody got nailed, but it took a lot of time.) One of my brother’s buddies played pickup basketball in the late 1960s with John Norman Collins, who was soon apprehended for the torture killing of at least six young women and girls. A co-worker of mine had a college roommate who went missing on her way to class and was never found. They both routinely hitched rides to campus… 1970s…

A guy who played the trumpet in my marching band at college turned out to have murdered his mother and girlfriend by running them over (separately) with his car. I remember that guy as being weedy and odd, turning out for practice in dress pants and black leather street shoes, while the rest of us ran around in jeans and sneakers. I could easily have suspected him of obsessively collecting bottle caps, but not killing anybody. Cannot remember his name, or would have Googled him for any recent info.

You may have similar stories. David Buss wrote a fascinating book on the subject,  'The Murderer Next Door'. The point is, human life is so profoundly layered. My purpose today is to remind us writers, especially us little liberal arts majors who have never been arrested, let alone shared a cell with convicted felons (for instance), to be open to the vibes that swirl around us. We tend to forget, and maybe even deny, human evil. It’s not just in TV shows and true-crime books. Our observations inform our work. Good, evil, see it all and feel it all. Occupy your place in the world deeply.


If you'd like to receive this blog automatically as an email, look to the right, above my bio, and subscribe there. Thanks for looking in.
Posted by Elizabeth Sims at 1:42 PM

Email ThisBlogThis!Share to TwitterShare to FacebookShare to Pinterest
Labels: David Buss, human evil, The Murderer at the Next Pump, The Murderer Next Door (book)