The Pounding Power of Publicity

A few years ago, a neighborhood friend invited me to lunch at a tiny Cuban restaurant nearby. The food was fabulous, and reasonably priced too. The place could have done with a good scrubbing, but no matter: Every table was full and customers were waiting to get in. My friend introduced me to the owner, who talked about how incredibly busy he’d been, ever since a ‘guy’ with a popular TV show did a segment on his place.

I learned that before the ‘guy,’ business had been terrible. The owner opened a second location across town with hopes of improving his cash flow. But that failed, and he was facing having to close the original location too. His staff and friends got together and convinced the TV guy to check this place out. Guy came, he saw, he ate.

The morning after the show aired, the owner decided he’d better get to the restaurant extra early to do more prep work in case it got busy when he opened. When he arrived, a long line of customers had already formed, and the restaurant wasn’t going to open for two hours yet. And ever since then, the place had been super busy, and this was a couple of years down the line. Great Cuban dishes, great staff. 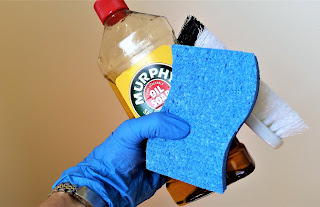 But then the owner got slapped with a health code violation. Roaches and dirt, yeah. It seems he didn’t take it very seriously. The next inspection, he got closed down. Customers mourned. According to my sources, the owner refused to do what the health department required, so they kept him closed. Then, sadly, the owner died unexpectedly.

The owner of another Cuban restaurant in town bought the place, cleaned it out (he told me it took his team two weeks to do a thorough job), renovated it, and opened under his own name. The food is just as marvelous. But guess what? Hardly anybody goes there. You can always get a (nice clean) table.


If you’d like to receive this blog automatically as an email, look to the right, above my bio, and subscribe there. Thanks for looking in.
Posted by Elizabeth Sims at 11:46 AM

Email ThisBlogThis!Share to TwitterShare to FacebookShare to Pinterest
Labels: great Cuban food, The Pounding Power of Publicity, TV show with a 'guy' on it