Hay is fodder for animals, and is made of dried plants bundled into bales. You may have heard the terms timothy hay, clover hay, and so on. Dried alfalfa is hay. Certain kinds of legumes are grown for hay. Farmers grow hay crops such as these to be cut, then left to dry, then baled.  So yeah, if the field is cut and dried, it’s finished, settled. (In olden times before farm mechanization, farmers would simply scythe down meadow grass, or any kind of undifferentiated growth, let it dry, then stack it for animal fodder.) Modern hay bales are either square or rectangular, and they separate into segments called flakes. A flake can be an easy way to measure how much hay you’re giving to your animals. Also, you’ve seen hay in round bales, you know, those huge picturesque rolls that dot the fields. Some city dads tell their kids those are cow cocoons: The mama cow lays her egg, then builds that large roll of hay around the egg, so that when the calf hatches, it has something good to eat right away. It then can eat its way out and be all nice and healthy when it comes into the world.

Straw is what is left over from the harvesting of grains: the dried stalks of crops like wheat and oats. Straw is used as bedding material for animals, and decorative bales of straw are sold in hardware stores around Halloween time. That hayride you went on when you were a kid at some farm? It was most likely straw you were sitting on, there in the wagon.

So: a horse in a stable eats hay while standing on straw.

Cement is a substance that sticks things together. Concrete is made of cement, aggregate, and water. Cement for use in concrete is made mostly of finely ground limestone. It's a powder. If you wet it, it’s slick to the touch, and sticky. Aggregate, in this sense, is a mix of stones and pebbles and perhaps sand. You mix cement with aggregate and water, and you stir it around, and you pour it someplace, and when it hardens you have concrete.

The sidewalks you walk upon are not cement, they are concrete. Pilings and abutments that hold up modern bridges are made of reinforced concrete. Even though people call them cement mixers, they are concrete mixers. Nothing is made entirely of cement.

Bonus: the concrete you walk on can also be called pavement. 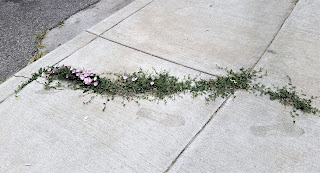 Iron is an element, chemical symbol Fe. You have heard of ferrous metals; a ferrous metal is a metal that contains iron. Steel is an alloy that is made from iron and other elements, such as carbon and manganese. It is a ferrous metal.

Bonus:
This morning you may have fried your eggs in a cast iron skillet. That skillet came out of a mold: it was cast in iron. The railing you lean on when you watch the Mardi Gras parade from your French quarter apartment is made of wrought iron, which is ductile and malleable, perfect for a blacksmith to make curlicues and slender railings from.

You are now officially the third kind of writer. Stick with me and you’ll be all right.

Email ThisBlogThis!Share to TwitterShare to FacebookShare to Pinterest
Labels: cement versus concrete, growth proving its strength, hay versus straw, iron versus steel, Three Kinds of Writers