Writing in the Basin
I’d never heard of the Permian Basin Writers Workshop before they asked me to come and be on their faculty this year, but having minored in geology, I actually knew what the Permian Basin is, so I was like, sure. The event will be in Midland, Texas from September 15 through the 17th. I’ll be doing my workshop called “How to Write a Dynamite Mystery or Thriller That SELLS” on Saturday the 16th. Coincidentally, fellow Writer’s Digest personality Chuck Sambuchino will be doing a boot camp there on the 15th. Anyway, if you live in the general area of West Texas, or even if you live in someplace like Stuttgart, consider joining us for a non-grueling, lively series of presentations. I’ll be doing my longer version of that workshop, over two sessions instead of one, and participants will be able to do a bit of real live writing to test out my ideas — and theirs. Productivity! Yes. Gonna wear my custom cowboy boots, made many years ago in the nearby town of San Angelo. (’nother coincidence.) 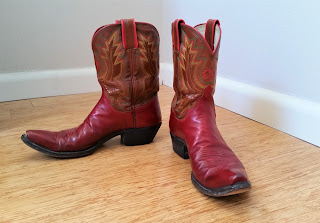 [I designed them, too, with my initials done the same way as I sign them. Boots by Rusty Franklin Boot Co. These are peewees, but he made a standard pair for me too, black and cream in color. This is not my first rodeo. Photo by ES.]

Update re: ZB 210
Remember the Cuban restaurant I wrote about last week? Marcia and I decided to go there for dinner that night, only to find it closed. A staff member at the other location said the closure was permanent.

A Nasty Problem
But speaking of restaurants and visibility, I’m reminded of how dueling signage nearly ruined the business of a Chinese restaurant in a small town Marcia and I used to live in. When we were new there, we drove around to familiarize ourselves. We stopped at a light and noticed a restaurant and its large sign that said, nasty chinese restaurant. Why on earth would someone call their restaurant that?, we wondered. Let’s not eat there. Some days later, I was walking along that same street. I looked at the restaurant from a different angle, and saw that its name was really dynasty chinese restaurant. A traffic sign obscured the first part of their sign when viewed from directly across the street. Now, the sign didn’t really almost ruin their business, but it did have an odd impact. You gotta love language.

p.s. re: Jay
I was gratified that so many folks enjoyed the recent post about my friend Jay, his typewriter business, and his budding interest in photography (Zestful Blog post 209, “A Blind Man Sees It”). I just wanted to add one more thing about Jay: always smiling, always enjoying the moment — and being fully present.

Say it Loud
I’m dictating this post using Dragon Naturally Speaking software, premium version 13. After a friend alerted me to a post by Scott Baker about Dragon on Mark Dawson’s blog, I decided to give it another try. I had purchased and used the software a few years ago in advance of shoulder surgery, when I feared I’d be unable to write or type for a while. I didn’t take to it very well, so I did not continue with it after that. However, I’ve been having a lot of trouble handling all my projects and responsibilities and obligations. So I got hold of a newer version of Dragon and gave it a go, with more commitment this time, and I’m happy to report that it’s working pretty well. I use an inexpensive usb headset as recommended. I did have to correct Dragon on Chuck Sambuchino’s name, which came out “checks and Chino.” But barely a week after starting back using Dragon again, its accuracy is pretty good; Chuck’s name was one of only a few corrections I’ve had to make so far, and the only serious one. The first time I tried to dictate 1,000 words of original story, it took me three hours, what with having to make corrections as well as relearn the commands for dictation and navigation. But after just two more sessions, I dictated 1,000 words in an hour. I would imagine I can increase that to 2,000 without a whole lot of trouble. (And possibly much higher, given that a normal speaking pace is about 130 words per minute. 130 x 60 = 7,800.) The key is having what you want to say in mind, and then letting it flow without worrying very much. And don't be daunted by how much you don't know about it. If you just get the thing and follow the directions, you'll be fine. I’ll keep you posted on how it goes for me. Plus I can slouch in my comfy chair and work at the same time. Sip champagne and have my nails done.


If you'd like to receive this blog automatically as an email, look to the right, above my bio, and subscribe there. Thanks for looking in.
Posted by Elizabeth Sims at 12:47 PM