Welcome to the second installment of Close Reading!

I’m writing an article for Writer’s Digest magazine about pivot points in story development. While skimming around my bookshelves for examples last night, I found myself absorbed in rereading passages from James M. Cain’s novel Double Indemnity (first published serially in Liberty magazine in 1936). Now, the passage I’ll quote below is not an example of a pivot point. I’ll discuss those in a future post, after the article is in the can. But this passage just grabbed me, and I want to show it to you and talk about it. If you haven’t read the book (or seen the excellent movie, 1944), the protagonist is an insurance salesman, and he’s just entered into a plot with a woman to kill her husband, share the insurance payout, and live happily ever after.

[begin quote]
All right, I’m an agent. I’m a croupier in that game. I know all their tricks, I lie awake nights thinking up tricks, so I’ll be ready for them when they come at me. And then one night I think up a trick, and get to thinking I could crook the wheel myself if I could only put a plant out there to put down my bet. That’s all. When I met Phyllis I met my plant. If that seems funny to you, that I would kill a man just to pick up a stack of chips, it might not seem so funny if you were back of that wheel, instead of out front. I had seen so many houses burned down, so many cars wrecked, so many corpses with blue holes in their temples, so many awful things that people had pulled to crook the wheel, that that stuff didn’t seem real to me any more. If you don’t understand that, go to Monte Carlo or some other place where there’s a big casino, sit at a table, and watch the face of the man that spins the little ivory ball. After you’ve watched it a while, ask yourself how much he would care if you went out and plugged yourself in the head. His eyes might drop when he heard the shot, but it wouldn’t be from worry whether you lived or died. It would be to make sure you didn’t leave a bet on the table, that he would have to cash for your estate. No, he wouldn’t care. Not that baby.
[end quote]

That is a single paragraph, and it ends chapter 2 (of 14). This brilliant graph is an example of powerful narrative, and of strong character voice. 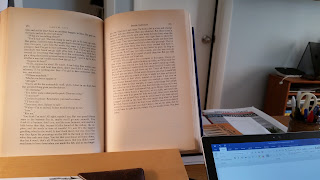 Of particular interest to me is Cain’s choice of the word [that] instead of [who] in this instance: ‘…watch the face of the man that spins the little ivory ball.’ Of course [who] would be correct. We are talking about a man, not a thing. If you were writing a term paper or literary essay, you would naturally write: [the quicksand that swallowed the hunter], but you wouldn’t necessarily write [the hunter that fell into the quicksand]. No, you’d write [the hunter who fell into the quicksand]. But Cain wrote the book in the first-person voice of his main character, Walter Huff (changed to Neff in the movie). And he shows us here, very quickly and subtly, that Huff is a smart man without much formal education. A guy who doesn’t care a lot about niceties.

What else does the reader learn in this passage? We learn from Huff that he sees life as a game—a deadly serious one, but a game just the same. We learn that he’s thought about committing insurance fraud for a long time, and he describes how that came to be: First he was doing his job, trying to think of scams to stay ahead of the crooks who kept trying to cheat his employer. To stymie crooks, it helps to think like a crook. Then, the progression kept going, almost-sorta-kinda naturally: He started to imagine himself being a crook—a successful one, not a loser, given what he knows from the inside. But that was just a fantasy at first, the kind of fantasy practically everybody can relate to. Then, however, the fantasy took hold and became a more realistic theory. Then, the right circumstances presented themselves, and now he’s got a solid plan that involves murder.

The way Cain constructed the graph is partly responsible for its impact. Huff drones on in the first few lines, then hits us with […that I would kill a man just to pick up a stack of chips…] which practically serves as a bullet itself. Then we get to […so many corpses with blue holes in their temples…] The starkness of that, the blunt, cold frankness, all told in the same steady cadence!

And we learn how Huff rationalizes the evil he’s about to commit. He hasn’t got a soul, not anymore, he tries to explain; he’s seen so much evil he’s jaded. And then Huff paints a picture of the roulette croupier, he tells a little hypothetical story, and it’s so real even we hear the gunshot when it comes.

If there’s a paragraph in all of literature that portrays self-interested cynicism better, while at the same time ingratiating the character with the reader by appealing to the reader's logic and intelligence—I don’t know of it. The reader is meant to identify with Huff, and we do, we pull for him, because we appreciate his raw intelligence, his ambition, his drive to do a complicated, dangerous job properly. Elsewhere in the story we’re invited to dislike Phyllis’s husband and to fear Phyllis’s treacherousness. We hope Huff won’t come out of this too badly. This is the embodiment of noir fiction: The story of someone who commits evil and with whom we empathize.


If you'd like to receive this blog automatically as an email, look to the right, above my bio, and subscribe there. Thanks for looking in.
Posted by Elizabeth Sims at 1:14 PM