Hi! I’m always so happy to see you. (I’ve never said that before in this blog, but it’s true. Everyone who reads my blog is my friend, because I get about as intellectually intimate as it’s possible to get, here. As soon as I upload a post, I imagine you reading and thinking along with me.)

The other day I wanted something to read that would be pleasantly stimulating but require no heavy lifting, so I cracked open my old Sherlock Holmes collection at random and read “The Naval Treaty.” Reread it, actually, but it had been so long that I didn’t remember the plot. As all Holmes readers do, I tried to guess the solution to the mystery. [Spoiler alert from here on; I’ll be discussing plot specifics.] I was fairly lazy about it, but one early hint stuck in my mind, and lo and behold, yep, the criminal turned out to be the fiancée’s brother.

Sometimes Sir Arthur Conan Doyle wrote stories with so few clues for the reader that you have to just wait until Holmes tells you what he was up to offscreen, so to speak. But this one actually revealed to the reader pretty much all the information Holmes was privy to. So I went back in one-page increments (roughly) from the end, noting specifically how Doyle constructed the plot and planted clues. 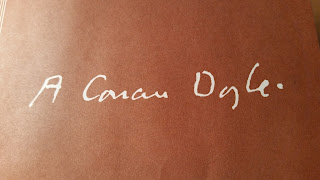 The setup: A trusted Foreign Office employee named Phelps is given the original of a pending naval treaty between Great Britain and France to copy over. In the midst of the job, he steps out of the room to get a cup of coffee, and the original is stolen. Phelps is in deep trouble, the British government could be screwed if the treaty ‘should fall into the wrong hands’ (love that trope), the police are stymied, and Phelps appeals to Holmes for help.

It would take many paragraphs to unpack and discuss all the complex facts and clues, including a nice red herring subplot involving the office charwoman, but here’s what grabbed my attention first: Holmes and Watson go to the unfortunate official’s house in Woking and are welcomed by his future brother-in-law, a guy named Harrison. Holmes remarks that the man is not a member of the family; Harrison looks down and sees that Holmes must have noticed his monogram, and says, “For a moment I thought you had done something clever.”

A most generous hint from Doyle! One who belittles the skills of Holmes usually pays a price. Going back further, I saw that Harrison was placed in London the night of the theft; Phelps had planned to ride the last train home to Woking together with him. Now that is an actual clue: a factual bit of business that twines into the plot. That thread is left lying through most of the rest of the story, though Holmes, we learn at the end, picked it up and made use of it immediately.

Then I read the story again from the beginning and noted all references to Harrison. Most were minor and offhanded, with the main sturm und drang involving the charwoman. I noted Harrison’s behaviors and figured out the timeline for him, and saw how Holmes would have zeroed in on him after excluding other possible thieves.

So: For learning good plotting skills, repeated close readings can be tremendously helpful. As a reader, you can pretty much figure that the shouting and arm-waving are often a smokescreen; the train tickets and bedroom assignments can tell the real tale. As a writer, take the time to read closely, reread if possible, and make notes, zeroing in on particular elements that catch your attention. Try reading out of sequence: backwards, as it were. Watching one key character all the way through a story can yield great insights. Short stories are wonderful for this, because you don’t have to invest a ton of time to learn valuable stuff. I don’t read everything so tremendously closely, but I do read slowly, and I like to reread books and stories I consider excellent.


If you'd like to receive this blog automatically as an email, look to the right, above my bio, and subscribe there. Thanks for looking in.
Posted by Elizabeth Sims at 12:51 PM