I hope the title of this post made you do a double-take, because of course every story is like no other; every story is unique to some extent. Not every story in the world, to be sure, is terribly interesting or even worthwhile, which is the point. If you’re a friend of mine on Facebook—or Facefriends, as my brother, who does not have an account there, gamely refers to it—you might have seen my post the other day about my YMCA buddy Chuck. I’ve copied the post below, after the picture.

Of any post I’ve ever put up on FB, this one has received the most likes, comments, and shares. I’m not terribly active on FB, so to me the following stats are remarkable: as of this writing, 197 likes, 29 comments, 5 shares. I have 1,087 friends on FB, though almost all of my posts are public and I think anybody can like, comment, or share. People have been moved to tears by the post. It’s a story about a guy who got a tough break and who is working his damnedest to overcome it.

My point today is to reinforce simply this: People love stories. People learn from stories. People get inspired by stories. People NEED stories. If you tell a story from your heart, with love and truth, you will succeed. What is success? It’s reaching readers, even one, with something meaningful to them. If you are a storyteller, you are a core asset to this world. Tell it plain, tell it fancy. But tell it. 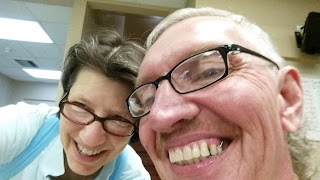 Took this selfie yesterday while chilling for a few minutes with Chuck in the snack room.

FB post:
So. This story. Last year while lifeguarding part time at the local YMCA, I met a guy named Chuck. Middle-aged, scrawny, disabled from a stroke. Used a base-line manual wheelchair, shoved himself along mostly with one hand and one foot. Had much trouble making himself understood, but I learned he'd been doing rehab for months. I operated the lift to get him in and out of the pool, where he regularly, doggedly attended water exercise classes. Made a point of calling him by name and cheering him on.
Last summer, a few months after getting to know him, was driving past the bus stop near the Y and saw him sitting in his chair in the hot sun waiting for the bus. The bastard was using THE BUS to get to and from his water exercise classes. How much easier to just stay home and vegetate in front of the TV? How much easier to just say, "I can't; (it's too much trouble)." How much easier to say, "I don't have a helper; I can't." Solo, he was helping his own crabbed-over, big-black-glasses-wearing, buck-toothed, determined ass.
After my six-month stint lifeguarding, which ended last December, I didn't see him as often, but I did see him. Yesterday, when I was swimming my lengths, I saw him in the water exercise group and waved. Later, as I was leaving the building, I saw him WALKING along the sidewalk outside. Using one arm-cane, big brace on his leg, glasses held together with a walnut-sized wad of Scotch tape, slowly, slowly, he was walking on his two feet.
Ran up to him. "Chuck! You're walking!" He smiled and nodded, and that was a hell of a great moment. A hell of a great moment. A hell of a beautiful sight. [end of post]


If you'd like to receive this blog automatically as an email, look to the right, above my bio, and subscribe there. Thanks for looking in.
Posted by Elizabeth Sims at 11:29 AM