OK, this isn’t writing advice, but perhaps somehow this post might help you make your writing life easier and therefore more zestful. It’s about analogue tools. I’ve been thinking about such because I recently turned in an article to Writer’s Digest on using old-school tools. I believe it’s going to run in November-December. I had a great time with it, and I’ll be sure to let you know when it’s available.

Pretty much everybody has a desk cup. Whenever I visit somebody’s house, especially another writer’s, I try to get a look at their desk cup, because I’m always interested in people’s tools and how they organize them. I keep refining the contents of my own desk cup, which is fairly small. Here is the story of my desk cup and what I keep in it.

The cup itself was a gift from the Peninsula Singers, a choral group based in Port Angeles, Washington. They had special mugs handmade as a souvenir for everyone who sang or played in a special performance of the Brahms Requiem back in 2005. If you’re not familiar with the piece, it is considered one of Brahms’s masterworks. It’s his longest and biggest as well, involving full chorus and orchestra, with soloists, in seven movements. It takes about an hour or more to perform. [Boast alert!:] I played the timpani, and was gratified to see this email to our conductor from an audience member who appreciated fortissimo:

Dated 12/15/2005  "Dear Dewey, Merry Christmas!  Thank you so much for your gifts to me & the community via music.  I always enjoy the P.T. Orchestra but this year I attended the Brahms 'Requiem'.  It was an epiphany of renewal of faith for me!  I was in tears (two handkerchiefs) through most of it, but especially the 2nd movement.
Please give my especial thanks to the lady timpanist for her verve and emotion in playing.  The ff timpani was the renaissance of my faith.
…

I will say I did a good job. [Boast alert all-clear.] Sadly, the concert was not recorded, and my sole reminder is the mug. It contains all my most-used implements, and here are photos, followed by the what-and-why. 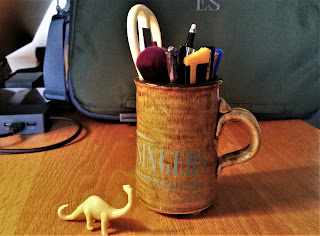 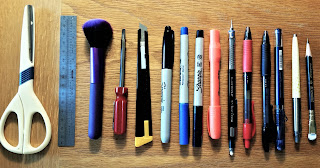 And now the catalogue:

-        No-brand plastic scissors with metal blades, a giveaway at a trade show when I worked for Borders. The blades have stayed sharp forever; wish I knew the manufacturer.
-        Six-inch steel ruler engraved in inches and millimeters that used to be in my dad’s tool box. This thing comes in so handy, so often, for measuring little things and sometimes scraping a label or carefully prying something.
-        Purple make-up brush, with which I dust off my computer and keyboard every morning. Purple was on sale. One of these also lives in my briefcase, along with a cleaning cloth.
-        Small screwdriver that can be reversed from slot to Phillips.
-        Another trade-show freebie, a snap-off razor cutter for opening packages and slashing pictures of my enemies. [Just wanted to see if you’re paying attention.]
-        Fine-point black Sharpie for addressing packages and drawing mustaches on portraits in museums. [Ditto.]
-        Two ultra-fine-point Sharpies, blue and black, for writing in shiny-coated greeting cards that reject ordinary ballpoint ink.
-        Orange highlighter. I use this most often when prepping my music for the various groups I play with. I prefer pink, because it splits the difference between visible-enough and obtrusive. But my pink one ran out.
-        Faber-Castell TK Fine Vario .7 mechanical pencil, because my sister uses one and I like to be like her.
-        Red Pilot G-2 07 pen, because sometimes you just want the emphasis of red.
-        The same pen in black, for general use.
-        Pilot Hi-Tec-C Maica 0.4 in blue-black, for finer work or just to change things up. The ink in these fine point Japanese pens lasts and lasts and lasts.
-        Ivory Parker Jotter with a strange pale-green-check graphic on it. This model is one of the older ones, with a metal cap and—important for durability—metal ring around the tip. I’ve customized this with a broad-point blue refill by Monteverde. Lovely to write with.
-        Soft-graphite wood-cased pencil such as the Blackwing original or the Faber-Castell 4B. Often it’s a Blackwing 602, which is the hardest Blackwing, but still on the soft side.
-        Fountain pens stay on standby in a drawer; I don’t like to store them vertically in a cup.

You’ll notice there are no multiples of anything. When you have like six pencil stubs, plus four cheap gimme pens from wherever, they crowd up the cup and stuff gets jammed. So, my point today is, you can save yourself a bunch of scrambling around if you just keep a few little things handy, buffered by a bit of empty space.

What indispensables are found in your desk cup? To post, click below where it says, 'No Comments,' or '2 Comments,' or whatever.
If you'd like to receive this blog automatically as an email, look to the right, above my bio, and subscribe there. Thanks for looking in.
Posted by Elizabeth Sims at 1:02 PM