Jay was born with empty sockets instead of eyes, so naturally much of his interaction with the world is through sound. He’s a talented musician, piano tuner, change ringer (church steeple bells), typewriter restorer, and composer. 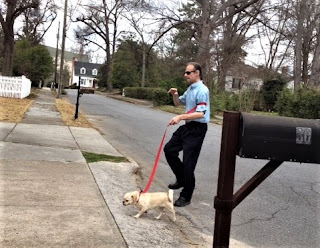 Here’s Jay with his dog Willow, who leads him on daily walks that include impromptu cross-country segments. Unlike a trained guide dog who waits for voice commands, Willow takes charge when they go out. As backup, Jay carries his collapsible white cane and phone, but has never had to resort to them. Willow always gets everybody home safely—though sometimes muddily. Note super secure leash hold.]

We correspond via email and the occasional phone call. (We live in different states.) Lately we’ve been sharing audio files back and forth, and talking about them.

I realize that blind people not only develop more acute hearing than the rest of us; they develop a greater ability to distinguish multiple sounds, or multiple auditory events, at once. A soundscape really does unfold in layers, or more like a 3-D texture, and they can perceive it so well:

A slamming car door isn’t just a slamming car door. It’s either nearby or farther away. It’s a big car—or maybe, come to think of it, it’s not a door slam after all, but the deeper and more final sound of a trunk slam, like maybe that Cadillac we rode in once. The clarity of the slam indicates the car’s position near the curb, because if it’s clear, it’s directly out front here. But if it’s muffled slightly, it’s parked a little bit over that way, because there’s that thicket of chokecherry in between, which, because it’s October, has lost many of its leaves, but maybe only about fifty percent, as of today. But if it rains, as it smells like it’s going to, well then a lot more leaves will drop and blow around and we’ll feel them on the sidewalk tomorrow when we go out. We can pick up a few and explore their structure and texture. Meanwhile, the FedEx truck has driven by, the three young girls who always walk home from school together have gone past, and some kind of hawk is making a kill nearby because, tiny little squirky death sounds.

With just this example, do we begin to understand the richness?

Jay talks about “reading” voices to detect their basic temperaments. He talks about timbre, modulation, complexity. He can characterize any voice, which can be a little unnerving when you realize he’s reading you.

I got this from him the other day:
“The guy that recently got my attention is Elliot Rodger, who went on that killing spree in California. He left a potload of videos on youtube and, if I had no idea of who he was, I would say that he sounds like an unimaginative actor trying to do his best with a very poor script. He will start by describing a scene such as a park that he’s near and he sounds rather cheerful and that’s the best part of the “script.” Then he starts his usual whine about how, no matter how he spruces himself up, the girls still flock to average dudes. A wee trickle of emotion creeps in when, just once, he puts some diaphragm into ‘It’s not fair!’ Otherwise, he has a gentle, tenor voice and even when he says that this is the ‘day of retribution’ he sounds hollow.”

Isn’t all this so goddam magical? I happen to think Jay is an extraordinary person, eyes or no eyes. I’m lucky to know him, and just wanted to share a little bit of our friendship with you. He’s cool with it.

Here’s something to try. Think about a scene you’re writing. Momentarily visualize it, then close your eyes and chillax. Consider sounds. Consider little bits of the scene one at a time, as they overlap and appear and disappear, not the scene as a whole. There will be sounds from things visible and not immediately visible. A jet overhead. Some guy banging with a hammer, trying to tear out the rusted muffler on his car. Softer sounds mixed with louder ones. Someone setting up a tent, someone sorting cards, drawing with a steel pen, gossiping quietly, sighing, laughing nastily, striking a match, making change, loading ammo, turning on the air conditioner.


If you'd like to receive this blog automatically as an email, look to the right, above my bio, and subscribe there. Thanks for looking in.
Posted by Elizabeth Sims at 12:48 PM