A Blind Man Sees It

A friend of mine blew my mind the other day, and I want to see if yours gets similarly blown.

Back when Marcia and I lived in California, we sold our condo in the East Bay en route to moving north to the woods of Washington. We were fretting over an imperfection in the kitchen floor when our real estate agent said dismissively, “It would take a blind man to see it!” We felt better, and that funny locution entered our lexicon.

After we got settled in our little house in the big woods, I happened to make friends with a guy who is a super talented trombonist (regional symphonic soloist level), a piano tuner, and a typewriter repair specialist. His name is Jay, and he was born without eyes. Here’s how Jay figures it: Evidently, the Depression hit God as well and he hadn’t the wherewithal to update his supply. So, he asked my soul if it would be okay if he gave me good hearing, curiosity, and a love of the ridiculous. My soul must have agreed, so here I am. Actually, SHE probably made that bargain. A HE would simply have said, “ah well, get over it.” Only Jay can make you laugh talking about being without eyeballs. He wears cool sunglasses.

From his youngest days, Jay figured out work-arounds to do what he wanted. For instance, after he learned to ride a two-wheeler(!), he mastered navigating his neighborhood by echolocation. He got an education, worked real jobs, fell in love, married, the whole deal. I knew his lovely wife, who, sadly, is no longer with us.

Some time in the aughts, Jay and I played Leroy Anderson’s symphonic novelty piece “The Typewriter” as a duet in the local symphony, using two typewriters from his extensive collection. That’s a story in itself, but I’m trying to stay on track here. Now he lives in Georgia and I live in Florida. He’s still playing the trombone, and he’s also gotten into change ringing (coordinated bell-tower team music). He’s still fixing and reconditioning typewriters, using his senses of touch, hearing, and—yes, I’ve witnessed it—even smell.

I got in touch with him recently to ask about a typewriter for another performance of the Anderson piece, coming up next concert season for the South Shore Symphony Orchestra (Tampa Bay area) with yours truly as soloist. He said he had a machine for me, a 1926 Underwood 4 that should sound great. He sent me this photo: 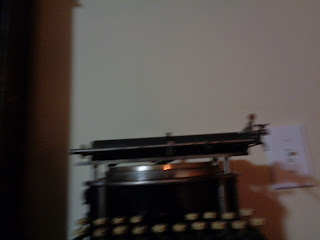 As a side note, he told me he’s exploring the possibility of becoming a photographer. [Mind blown.] He snapped the picture with a digital camera, figured out how to transfer the file to his computer, and sent it to me as an email attachment. He said his stepson is a professional photographer who gifted him with the camera. He knows the photo is blurry, and realized he needs to hold the camera steadier. Having worked as a news photographer, I gave him a couple of tips on that. Next he sent this photo, of another, recently acquired, machine, a Yost #1 from 1887: 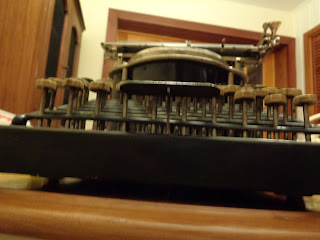 Jay intends to make more photographs, and he and his son are thinking they could put together a gallery of the pictures. I thought about it, and I’m like, my God, yeah. A sightless person faces something he’s interacting with, using his other senses, and captures an image he’ll never experience. The image will be something other than ‘what it’s supposed to be.’ But it will be something. I can’t describe how profoundly that first photo struck me. Layer upon layer of implications. I learned on line that blind photography is a thing—at least there are a few people doing it. Some of them are partially sighted, and some of them have their images manipulated by sighted people.

Jay, I know you’ll read this (because, software). If you do go forward with photography, I hope you’ll also write about the images you make: the things you were sensing and feeling at the moment of the snap. Wouldn't that be cool?

What is in this story for writers, artists, creative people of all sorts? Simply that there are no limits. Never say, “Yeah, yeah, but,” again. No need to. Look beyond, and keep looking.

What do you think? To comment, click below where it says 'no comment' or '2 comments' or whatever. I’ve changed how comments are posted, and am hoping no problems crop up. Let me know if you have trouble.


If you'd like to receive this blog automatically as an email, look to the right, above my bio, and subscribe there. Thanks for coming by.
Posted by Elizabeth Sims at 12:42 PM