So I joined Novelists, Inc. this year, which is a professional organization for authors. The vast majority of members are female; I learned that the organization started as a splinter group from Romance Writers of America. Last week I attended the annual conference, in St. Pete Beach (which is the real name of the town, separate from St. Petersburg.) (Unpaid plug for the Tradewinds resort hotel: If you’re looking for a place to have a midsized conference (200-300 people), you can’t go wrong there. Great layout & staff, many conveniences, & a terrific beach on the Gulf.)

Met some nice and very accomplished folks. There were some heavy hitters in the presenters ranks—like bosses from Amazon, BookBub, Nook, Ingram, and top publishers. I felt the long weekend was worthwhile; attended sessions and took notes like mad. Learned a ton of stuff, & will probably blog in greater depth on some of it. Key takeaways: 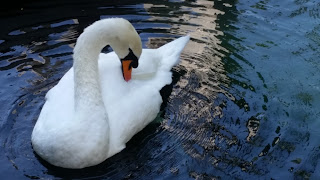 Example of deep POV? Which is better?:


If you'd like to receive this blog automatically as an email, look to the right, above my bio, and subscribe there. Thanks for looking in.
Posted by Elizabeth Sims at 1:10 PM