Quick note: I’ll be skipping the next two Thursdays, doing some vacay. Our 250-pound housesitter and his two pit bulls will be keeping things nice and safe while we’re away.

A writer turned to me for counsel recently, saying that he was kind of frightened to plunge into the book he wanted to write, because, well, maybe it won’t be any good and he’ll look like an idiot.

You can imagine my reaction.

The whole point of life, let alone writing, is to be OK with looking like an idiot. For three reasons:

One, nobody gets it perfect the first time;
Two, only if you risk idiocy will you have a shot at success; and
Three, so many people don’t even try, that you’ll stand out if you do.

As it happens, I’ve been making myself look like an idiot a lot at the YMCA pool where I swim. After learning a decent freestyle stroke, I’d been wanting to learn the flip turn. You know, where you swim up to the wall, curl-tuck-flip, and push off from the wall underwater. It’s smooth, it’s hard to do right, and it looks totally badass. 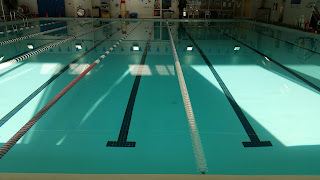 Every fitness swimmer wishes they could do a flip turn. But because it takes all this flailing and failing and sinuses full of stinging chlorine water while you learn (while everybody else keeps swimming calmly along in the adjoining lanes, checking out your progress with furtive glances), few make the effort. Every public pool is full of fitness swimmers who swim regularly for decades, stopping at every wall, turning around, and pushing off again.

But of course I’m like, what’s life for but challenges? For months I tried to achieve the basic, crux move, the underwater somersault, but just couldn’t get all the way around. As soon as my head pointed at the bottom I freaked out and had to go back the way I came. Finally I approached one of the swim instructors and offered her any amount of money to teach me the flip turn. Susan smiled and was like, You really want to do this? No charge, baby.

In fifteen minutes she had me doing the somersault with the assistance of a foam noodle, then a couple of foam blocks in my hands. Over the course of weeks, I practiced and practiced, and with Susan’s occasional guidance gradually started to put together the rest of the turn, which looks so smooth and fast but is actually a series of precision moves and micro-decisions all along the way.

You have to be OK with scraping your shoulder on the bottom, with ramming your butt into the wall by mistake, with running out of air, with flailing to the surface and gasping like a trout. I’ve heard that little kids can learn this much faster than adults, which is no surprise, because they haven’t had enough life experience to obsess about looking like an idiot.

Once I succeeded in the somersault, there was no way I was going to give up. And son of a bitch if I haven’t more or less gotten the hang of it. I don’t look like Katie Ledecky—my arms still aren’t well streamlined as I’m pushing off, and sometimes my air doesn’t last through the whole pushoff and I get a little water in my nose—but hell, I feel great. I know I’ll keep getting better at it. I swagger back to the showers like I just won gold.

And that’s the point of looking like an idiot.


If you'd like to receive this blog automatically as an email, look to the right, above my bio, and subscribe there. Thanks for looking in.
Posted by Elizabeth Sims at 8:23 AM