Last week I mentioned that I’ll be appearing at the Ringling College of Art and Design soon but didn’t have complete info. My gig will be at 7 p.m. Tuesday, August 23 in the Academic Center, Rm. 209. Local friends, I hope to see you there! Here’s more about the series, including the lineup and ridiculously easy parking instructions:
To support the new degree in Creative Writing, Ringling College of Art + Design has launched the Visiting Writers Forum. Each event will feature authors sharing their work, followed by a robust Q&A session with audience members.
Every Visiting Writers Forum event is free and open to the public. All events will take place on the Ringling College of Art + Design campus. While the Robert Olen Butler reading will also be free, it will be a ticketed event.

Where do I park? All of the events take place at the Academic Center. [Download a campus map from this link.] Parking is a breeze--anywhere you find an open spot is a valid option. Handicapped parking right in front of the building is also available if you have appropriate signage.

My friend Deni Starr, a former trial attorney and now author, has a new book out! Below the Belt goes like this:

Sean O'Connor, retired boxer, is asked by Maybelle Preacher to check out the boxing gym her grandson joined. Doing a quick check, Sean agrees that the place feels wrong. To find out exactly what, he contacts the professional private investigator Cindy Matasar, who helped him out in the past. While they begin their investigation together (quickly developing a romantic interest), they soon learn that their efforts are not appreciated by well-placed political figures. When boxers end up murdered, Sean and Cindy find themselves targets of a well-organized criminal enterprise with political clout. Just when they think they know who is behind it all, they find their prime suspect has been dead for years. Now it’s a race against time to uncover the killer before he strikes any closer to home.

The September issue of Writer’s Digest magazine published a feature by yours truly on how important the little things are in fiction writing. 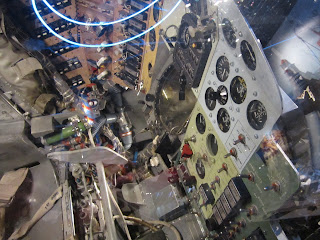 [Wow, lookit alla them little switches and gauges inside this space capsule! One gets the feeling each one serves a purpose.]

Here’s one of my favorite parts of the article, on how to make even minor characters memorable:

It’s easy to hotfoot it over a minor character, or person, whether in fiction or narrative nonfiction. But if the character is important enough to exist in the world of your story, let your readers picture that existence.

Pick a detail, any detail.
How would you describe the last guy who bagged your groceries? Did you see him? What about the friend of a friend you met the other night? Or the baby held by the distant cousin who showed up at that family funeral?

Being observant in your own life helps when the time comes to characterize someone. For a minor character, select just about anything, as long as you use something.

The knock-kneed cheerleader pointed and screamed.

The boss’s wife smelled like Jack Daniel’s and drove a red Ferrari.
Timmy’s chin quivered, but he gripped his bear tightly and kept quiet.

Spare no one.
Even a character who appears only in passing should exist in the reader’s eye. For a literally glancing description, make it visual.

The tram operator’s filthy hands worked the levers, and we were off.
The buxom croupier sticked the dice over.

Pan the crowd, then zoom in.
Describing groups of people can be challenging, but you cannot get away with such say-nothing generalities as:

The people at the party had on a multitude of different outfits.

Instead, give one or two overall details, then zoom in on one person as a representative.

Guests in classic Hyannisport gear—sweaters thrown over shoulders, loafers without socks—crowded into the refreshment tent. “Where’s the champers?” demanded a sunburned young woman in a tight white tennis dress.

What do you think? To post, click below where it says, 'No Comments,' or '2 Comments,' or whatever.
If you'd like to receive this blog automatically as an email, look to the right, above my bio, and subscribe there. Thanks for looking in.
Posted by Elizabeth Sims at 12:07 PM