Once, years ago, when I was fumbling around for a pen at work, an office mate informed me, “The core of the earth is made of molten ballpoint pens. The ones everybody constantly loses. They migrate through the dirt and eventually arrive at the core of the earth, where they become molten.” Even though I’d minored in geology in college, I thought this theory had a lot of merit.

For most of my life, ballpoint pens have justly occupied the lower rungs of scriverdom (I just made up that word—no applause, just throw money) because they were so unpleasant to write with. Even though they were invented before the turn of the 20th century and mass-produced by midcentury, 1960s  ballpoints tended to be sticky and skippy, and you only used them because they were cheap. They even leaked in pressurized airplane cabins. That fact I learned from watching the Mad Men episode where Don and Salvatore fly to someplace and Sal’s pen leaks. (Given the context of that episode, the leaking pen is very funny.)

BIC pens found a temporary place in my heart after the 1968 winter Olympics in Grenoble, France, where Peggy Fleming won gold in women’s figure skating. Sitting next to my mom on the couch, watching our flickering Zenith black and white, I was entranced by Peggy’s grace and athleticism, riveted by the breathless announcers calling her moves: “And now… the double-axel… Yes, she does it…” It was only later that I saw the fabulous chartreuse color of her dress in a magazine. After the Olympics she did a TV commercial for BIC pens where she skates around a darkened arena just like at the Olympics, with a BIC strapped to her ankle, point down on the ice. Point down. On the ice. At the end she does a long hard spin, and man, the ice chips fly! Then she skates over to a pan of fire—a pan of fire!—just like the Olympic flame, unstraps the pen, and holds the point in the flame for seconds on end. Then, stunningly, she writes BIC on a pad of paper. Incroyable. So I was like, BIC for president. (Sadly, there seems to be no available video of that spot. If you find it, please send me the link.)

The costlier Papermate brand always wrote smoother, and anybody remember Lindy pens? Bullet-shaped cap, metal pocket clip with a cutout of a tiny seal balancing a ball on its nose. Those were cool pens, smooth-writing, plus they came in different colors. Gone, though. 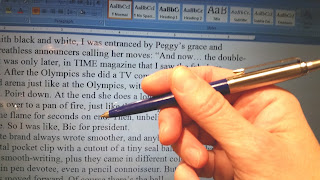 So once I got old enough to discover the joys of fountain pens, I became a fountain pen devotee, even a fine pencil connoisseur. But lately I’ve realized that ballpoint technology has moved forward. Of course we have the ball-tip gel pens, which were a significant leap.

Over the course of the past year I’ve been experimenting with various ballpoint pens and cartridges, and gosh, there are some good ones out there. Anybody familiar with the Schmidt Easy Flow cartridge from Germany? Really smooth and nice. Fits the Parker Jotter and others. The Parker Quink Flow cartridges are good too, way better than the standard Parker cartridges of even 15 years ago.

The best part of Parker Jotters, by the way, is the click mechanism. Hear the biting authority of it, feel the taut certainty of it. Yeah, baby. Did you know that every time you click it, the cartridge rotates 120 degrees, to ensure even wear? Brilliant.

I’ve heard good things about the Monteverde Superbroad refills and have a few in my Amazon cart. Various ink manufacturers have gotten into making Parker-compatible refills, to satisfy different customer tastes. And, given funding sites like Kickstarer and so on, metalsmiths are designing and selling small-batch nice pens of aluminum and other metals that will take those refills. I have a few, and I suppose I'll wax poetic about those someday.


If you'd like to receive this blog automatically as an email, look to the right, above my bio, and subscribe there. Thanks for looking in.
Posted by Elizabeth Sims at 1:18 PM