Quick announcement: Sign up here to win one of three Kindle copies of Damn Straight at the Lesbian Review.

Today’s post is about writing with economy. Most of us who watched television in the 1960s are still afflicted with old brainworms in the form of theme songs from sitcoms. I can still, after enough gin, sing the complete themes from Gilligan’s Island, the Patty Duke Show, Green Acres, and the Beverly Hillbillies, as well as shards from Petticoat Junction and the Brady Bunch.

Not long ago I read about why the Gilligan’s Island song was written. Sherwood Schwartz, who conceived of the show about a motley group of castaways on a desert island, had trouble convincing TV executives to put it into production. Their main objection was that it would be tedious to recap, during every episode, why and how the people got stuck on the island. 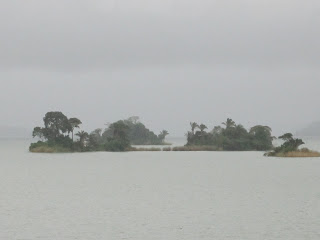 So Schwartz went home and, with composer George Wyle, wrote a theme song that told the story perfectly: “Just sit right back and you’ll hear a tale, a tale of a fateful trip…” The song rolled through the opening credits, so a first-time viewer would be as savvy as a devotee. The execs’ problem was solved, and they green-lighted the project. The show became such an off-kilter hit, it affected pop culture in multiple ways, from phrases from the song (“a three-hour tour,” for instance, as shorthand for an unexpectedly interminable situation), to Gilligan’s white bucket hat and more.

My favorite phrase from the song: “The ship set ground on the shore of this uncharted desert isle…” It’s brilliant. You learn why nobody’s found them: the island’s not on any maps! Uncharted! One simple word, thrown in fast.

The other sitcom songs achieve the identical objective. My point: All writers can learn from these seemingly stupid songs! Look a few up online, read and listen to them carefully, and perceive all sorts of lessons on how to write with purpose and economy.

Have you ever found a writing lesson in an unexpected place? To post, click below where it says, 'No Comments,' or '2 Comments,' or whatever.


If you'd like to receive this blog automatically as an email, look to the right, above my bio, and subscribe there. Thanks for looking in.
Posted by Elizabeth Sims at 1:24 PM