Thought you might be interested in some facts and figures today. Over last weekend and into this week I put The Actress up for free on Amazon Kindle, for the full 5-day period allowed, from Friday through Tuesday. Initially I thought I’d just make it free through Sunday (Oscar) night, but decided to leave it up the whole time, because it was doing so well.

First, context. My fiction is all in the Amazon ‘Select’ program, meaning the books are only available in e-book form on Amazon Kindle. The benefits, so far, are worth it to me. The vast majority of e-books are sold on Amazon, and if your books are in the Select program, you get more exposure and more money. This isn’t necessarily meant to be a ringing endorsement of the program, it’s just to explain why I, an author who values simplicity, am sticking with it for now. Your ‘Select’ books can be read for ‘free’ by readers who have signed up for Kindle Unlimited or KU (they pay $9.95 per month for unlimited access), and for actual free by readers who own a Kindle device (via the Kindle Owners Lending Library, or KOLL).

Free is good. You reach readers this way who wouldn’t necessarily find and buy your books on their own. The immediate benefit is that you, the author, get paid per page of free material read. It’s a fraction of a cent per page, but it adds up (example below). The extended benefit, of course, is that some readers who like your work will read and buy more and become fans.

Last week’s promo was the first time The Actress was free to anyone who wanted it. On Friday when my newschat and blog about it went out, readers downloaded it 2,629 times. Saturday: 1,408. Sunday: 731. Kind of a geometric progression. To my surprise, the book quickly reached #1 in the Amazon free store in the legal thriller category, and it ranged between 8th and 11th in the female sleuth category. It also broke into the top 100 free books overall, reaching #63 at its best.

Meanwhile, not much happened with my other titles, which, I’ve found, is typical when a free promo is running. My sales and free pages read were suffering from the winter blues, and I hoped this promo would help. The bump, if you’re going to get one, generally comes after the free promo is over.

As of Sunday night the book was still the #1 free legal thriller, so I decided to let the promo go the maximum time, through Tuesday, just to see if the ranking would hold, even though free downloads were slowing way down.

On Monday 400 more readers downloaded the book, and on Tuesday 427 did. A few spilled into Wednesday given international time zones: 17. So total: 5,612. That’s a lot of potential readers. Now, authors have learned that not everybody who downloads your freebie reads it, but a bunch will get to it, sooner or later. The book’s rank dropped to #2 and then #4 in free legal thrillers as of Tuesday afternoon, then I stopped keeping track.

Sales of my other books have bumped up a little in the last couple of days, but it’s too early to tell how well that will go or how long it will last. Mainly it’s the KU and KOLL pages read that have soared. As soon as the promo started, they jumped from dismally below 1,000 per day to way over that. Yesterday KU and KOLL readers made it through 3,776 of my pages. As I’m writing this midday today, about a thousand pages have been read. 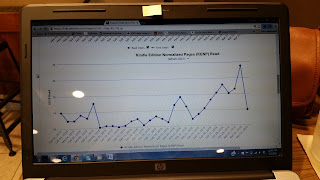 [There was a bit of a bump for the quickie free promo of Easy Street I ran earlier in February, but the big spike is the result of The Actress promo.]

I’m ramping up my promo work for my books, primarily by writing and planning more releases. I’ve been talking a little bit about Crimes in a Second Language; stay tuned for more on that this month.


If you'd like to receive this blog automatically as an email, look to the right, above my bio, and subscribe there. Thanks for looking in.
Posted by Elizabeth Sims at 1:08 PM