Lying is Good for You

Writers need to keep their brains sharp and guts alive, and one way to do it is be on the lookout for opportunities to lie. I’m not talking about the lying we do in our fiction, which is, of course, the whole point. Neither am I talking about malicious lying; my subject here is recreational lying. Recreational lying pumps your adrenaline and challenges your wit. I discussed this a little in Zestful Post #54 (“5 Good Reasons to Make Stuff Up), but want to expand a bit on it here.

Life is just too damn boring sometimes. Enough bloggers rant about our hyper-risk-averse culture and our increasingly ensafened public spaces (rubber cushions beneath the monkey bars; helmet laws). But I feel one’s comfort zone is one’s own business, and it’s up to us to stay in it or step out of it. Lying is such an easy way to walk on the wild side.

One of my favorite recreational lies happened at a summer polo match in the Detroit area back in the 90s. (Someplace like Farmington Hills, as I remember.) The Borders Book Shop I managed in Birmingham was an advertiser on the local classical radio station, so I regularly got invited to thank-you parties, which was a nice perk. For one such party, the station (WQRS, anybody fondly and sadly remember it?) set up a lavish hospitality tent at a polo match. Though I’d never been to a polo match, I guessed correctly that one should dress nicely and be on good behavior.

I wore a crisp chambray skirt and a sleeveless top, which just happened to expose the fresh blackwork tattoo I’d received on my right upper arm a month before. It was a grasshopper, or locust, designed by me and inked by a well-known artist in Ann Arbor. (Anybody remember Suzanne of Creative Tattoo? Another bygone entity.) I’d wanted a symbol of strength and lightness, and thought the hopper a good choice. Being so new, the tattoo was profoundly black and stark against my white-girl skin. 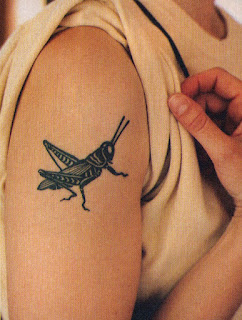 It’s safe to say mine was the only visible tattoo on the whole polo grounds. I might characterize the other guests as upper crust; most were prosperous business owners and their spouses. I was experienced enough to know, however, that most of them would be somewhat nervous coming to such a hoity-toity event—this was Detroit, after all—and therefore vulnerable and credulous.

As the horses thundered to and fro, I snagged a mimosa and headed for the buffet of first-class delicacies. Three society gals of a certain age assembled behind me in line. I heard a brief whisper, and turned. Decked out in pastels and their afternoon pearls, they were staring at my tattoo. One found her nerve and said, “Where did you—what’s—?”

“Oh,” I said with a smile and a shrug, “I used to live in Los Angeles, and I was in a girl gang for a while. This was the initiation tattoo we all had to get.”

Their faces were just so fabulous. Just writing about it, I feel the rush all over again.

Most recently, I recreationally lied at a restaurant in Mount Dora, Florida. Marcia and I were getting up to leave, and the couple at the table behind us were interested in the pork chop special. “What’s it stuffed with?” asked the guy. The server took off to check for sure.

Without thinking at all, I leaned in and said, “Ze pork shop, eet ees fabulous. Ees ver’good—ver’ good. You try eet, OK?” Somehow I sensed zey deed not speak Frainch. They gazed at me with respect, and when the server returned, the guy ordered the chop. I nodded my approval, though I had eaten the steak salad. The couple’s eyes followed Marcia and me to the door, and I just felt that much more alive.

There’s nothing wrong with taking vitamins and obeying the speed limit in school zones. But recreational lying is downright good for you, your brains, and your guts.


If you'd like to receive this blog automatically as an email, look to the right, above my bio, and subscribe there. Thanks for looking in.
Posted by Elizabeth Sims at 2:15 PM