As it happens, Left Field won a Goldie award (Mystery/Thriller category) at the GCLS conference last weekend in New Orleans. Notice I say ‘a Goldie,’ not ‘the Goldie.’

Everybody knows awards processes are inexact and nervewracking. While waiting for the ceremony to get going, I consumed two martinis (Tanqueray, dry, up, olives), a charcuterie plate, then a plate of lettuce-sashimi wraps, then two pieces of s’mores pie, which I would never do in real life. (The pie.) (It was free.)

As the show started up, I thought about the Olympics, which I avidly watch every time. I always find myself envying, in a way, athletes whose medals depend on empirical measurement (fastest, highest, most goals), and pitying, in a way, athletes who rely on being ‘best’ according to judges. At least in the Olympics the judges have lists of exacting criteria to apply, which help quantify the aesthetics. Not that that eliminates controversy.

But in literature? Articles have been written, letters sent, feuds fought over prizes. Do you remember the shitstorm back in 1987 over Toni Morrison’s Beloved? If you weren’t born yet, that’s OK. The book was shortlisted for the National Book Award but lost to Paco’s Story by Larry Heinemann. Forty-eight black authors wrote an emotional open letter that was published in the New York Times book review, saying that Toni should have won a National Book Award or Pulitzer by then. Lo and behold, a few months later, the Pulitzer went to Beloved. Did that letter have any effect? Who can say?

So last Saturday night my name was announced and I jogged up to the podium and said in part that such things are always a crapshoot, because judging is by definition subjective. And I thanked the judges, which one should always do.

Having been both a winner and loser of literary competitions, and a judge in several of them, I know just how idiosyncratic the process is. You have preferences in style and theme. You might have heard some scuttlebutt about an author that makes you frown—or smile. And how can you decide which piece of art is ‘best’ among a bunch of good ones? But you strive to be impartial, because you have a horror of someone judging your work in a cavalier way. You bear karma in mind. It is what it is.

The GCLS organizers address the inherent-unfairness issue by awarding more than one prize per category, depending on the number of entries/finalists. This dilutes the distinction of the prize and makes the losers feel even worse, but it does exponentially increase winner happiness by letting two or three people go home with 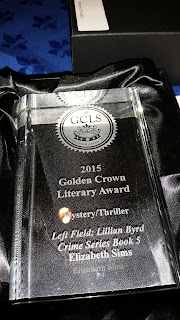 a piece of crystal and bragging rights. The other winners in my category were Anne Laughlin for The Acquittal and Nene Adams for The Consequence of Murder. Congratulations, women!

I might add that this practice also increases the number of times the GCLS is mentioned and discussed. The organization and conference have grown from just a handful of women to many hundreds. This year’s conference attendance was about 350. That’s significant.

Why prizes at all? Because prizes, along with bestseller lists and reviews, are our report cards. They influence customer choice. And that’s why we put ourselves through this imperfect, disquieting process. Yay for me—this time around.


If you'd like to receive this blog automatically as an email, look to the right, above my bio, and subscribe there. Thanks for looking in.
Posted by Elizabeth Sims at 11:17 AM