Recently while killing time in a strip mall, I went into a used bookshop, which started a chain of events that led to this post. I call these events everyday scholarship, and here is the story.

In that shop I came across a 1941 Modern Library anthology of American plays (full cloth binding—God, those were the days) and bought it for a few dollars. Opened it the other day and commenced reading Lillian Hellman’s The Little Foxes, which I’d never read or seen on stage. Not to be confused with The Children’s Hour.

Almost immediately, I felt like I was reading the play in a vacuum. What was the author intending to communicate in this piece, which is set in 1900 and had its premiere in 1939? Even knowing something about the political and social landscapes of those two eras, I couldn’t immediately grasp it. 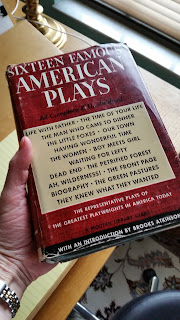 Briefly, The Little Foxes centers on a well-to-do Southern family not far postbellum, who fight, argue, and scheme against one another. The object of the game is a vaguely described cotton mill and the wealth and power it would bring to whoever owns the largest share.

I already knew Lillian Hellman was decidedly leftist in her politics and thus one might expect that point of view to be advanced in the play. But I wanted some more gloss, so I could be a more acute reader. I searched on line and discovered just the thing: a lengthy review of the play by Elizabeth Hardwick in the New York Review of Books. This review was written in 1967, of a Broadway revival in that same year. Yet another era, with its own social and political context!

Hardwick was pretty scathing, stopping just short of calling the play commie propaganda. But she also compared it against her own standards of good drama. Her main complaints were over-simplified characters (divided into good and bad), and implausible motivation for the key character of Horace. He’s a retired banker, whose money could put the family over the top in their quest to complete the sizable downpayment on the mill.

Horace is against putting money into the mill, and Hardwick questions why a banker wouldn’t recognize the terrific investment opportunity and release the money? I also read the fierce letters to the editor on the review, and Hardwick’s answering of them. Literary feuding at its best! It was almost as good as drinking a martini at the Algonquin.

I finished reading the play expecting to agree with Hardwick’s opinions, and I did agree with some of them, especially her criticism of Hellman’s relentless lefty preachiness. But I felt the Horace character behaved reasonably, given the framework of the play: He recognized that the mill would be run in an avaricious fashion by his crummy brothers-in-law, and while profitable, would not be a force for good.

In this post, I’ve attempted to answer the question: Why should I read literary criticism? Answer: because it makes your brain better, and because it’s a deep kind of fun. When your own curiosity drives you to learn and think, well, it's fabulous. The Web makes it so easy to find viewpoints and counter-viewpoints on practically everything. What an era we live in.