The typewriter in the accompanying photograph is a 1926 Underwood 4, so called because the keys are arranged in four rows instead of three, which had been more common for typewriters manufactured in earlier decades. My friend Jay Williams, about whom I’ve written in this blog before, sent it to me as a gift last spring. He’s a typewriter buff, and spends some of his time restoring old machines. He restored this one before sending it to me. In spite of that, it certainly does still show its age and experience. He and I have talked about old things being time machines. Environments can be time machines too. When Jay talks about climbing a stone bell tower at his church to participate in change-ringing, he describes the worn, smooth stone steps and the cool roughness of the stone walls and the sound that one’s footsteps make and he feels that that’s the closest he can get to real time travel.

When he sent me this machine, I called to thank him, and we speculated on the machine’s history, and what it might’ve been like to be with this machine in its early days. This Underwood is a heavy-duty business machine, and they were costly, so this one most likely was used in an office, perhaps a newspaper office. Because Jay is blind, we talked about the sounds and smells and feels of when this machine was new: The newspaper office almost certainly would have had more than one machine, and more than one machine going at a time. These typewriters are wonderfully loud and authoritative, entirely mechanical marvels. This one’s frame is cast iron. In that newspaper office there might have been perfume to smell, cigars and cigarettes, their smoke and their butts and their ashes, there would have been the smell of ink and paper, the squeak of chairs moving back and forth, perhaps rolling on casters, the sound of the boss’s voice, the copyboys’ voices, the reporters’ voices, telephones ringing, telephones being answered, the scratch of pencil on paper as a phone number and address and perhaps a name and other things were written down.

It might have been summer, the windows open, the blinds catching a little on the windowframes in the breeze, the sound of engines and rubber tires outside, perhaps the aroma of manure as well, if horses were still pulling wagons. Footsteps, voices. The sidewalks would be possibly concrete, the streets might still be cobbled, the floor in the newsroom would perhaps be of heavy linoleum that was swept every night by the janitor and polished once a week. 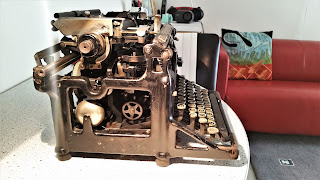 Having something in the house that is this big and heavy (about 30 pounds) and old, and so well worn—it has its own presence. It’s a much stronger presence than most things we have in our house, frankly. Why is that? Maybe because every part of this machine is authentic. It was designed to do exactly what it was supposed to do, without extraneous styling. The only decoration on it is the manufacturer’s name. In the photograph you can see the sideways-mounted bell. You can also see the new drawband Jay installed on the mainspring. All the pieces still work, all the parts still do their job. There is a tabulation function. There is a lever to select which half of the ribbon you want to use, the upper half or the lower half. (Many typewriter ribbons were made with the top half being black and the bottom half being red or vice versa.) There is a lever to select the stencil function, which disengages the ribbon, while the carriage moves normally. There is a shift key for uppercase letters, and there is a shift lock key. There are margin controls and numbers and special characters besides the alphabet.

There is a gravitas to this machine, is what I’m trying to say, and the other thing I’m trying to say is that many things have a greater presence then we might give them credit for. So much of our world is digital, and so very fast, that spending time with objects on a personal level can be enriching. You know? Something that was designed and made for function and efficiency is to be honored, isn’t it?

I say, surround yourself first with empty space, then add things to it that are well-designed, sincere, and useful or beautiful or both.

I’ll be performing Leroy Anderson’s “The Typewriter” on this machine on October 29, 2017 with the South Shore Symphony Orchestra in Sun City Center, Florida. With luck the performance will go well and I’ll want to share the video. After that's safely over, I'll install the new ribbon Jay sent with the machine and do some writing on it.

What do you have that is somehow more than the sum of its parts? Something that offers genuine experience when you interact with it? To post, click below where it says, 'No Comments,' or '2 Comments,' or whatever.


If you'd like to receive this blog automatically as an email, look to the right, above my bio, and subscribe there. Thanks for looking in.
Posted by Elizabeth Sims at 1:21 PM