If you’re still with me after reading the title of this post, congratulations and thank you. I appreciate that there are so many serious writers who follow these posts. What you get here, and here alone, is my perspective on how to write well, how to avoid crappy mistakes, and how to arrange one’s life as a writer.

Back in the 1980s I worked in the human resources department of a large financial institution. One of our tasks was training bankers on how to sell bank products—checking accounts, credit cards—to retail customers. My boss bought an up-to-the-minute sales training program on video and we decided to try it out on our bankers.

The videos followed a salesman with a product called a transporter, which (oddly) looked like an ordinary microwave oven, but was supposed to transport whatever you put in it from one place to another, as if by magic. Obviously this was a dummy product; the product itself was unimportant; the point of the video was to demonstrate effective, customer-oriented sales techniques.

The salesman in the video demonstrated all the right stuff: questioned his customers as to their needs, discussed characteristics of the transporter, elicited objections, overcame objections with further discussion and questioning. In the end, the customer agrees to buy a transporter. I thought the videos were fun and effective. To those of us in HR, it was an easy jump to think of ways to use those sales techniques to sell all the different sorts of bank products the company offered.

But the first time we showed the video to a group of front-office employees, they sat there impassively through the whole thing. When it was over there was silence, until one guy finally said, “But we’re not selling transporters.” These front-office bank folks were utterly baffled as to why we would show them a video on how to sell transporters. They were incapable of extrapolating from the video to their own frame of reference. (And that was the end of the transporter videos.)

Understand that there are millions of people just like those bankers. And they read books. Most writers have an intuitive feel for extrapolation, but I think it’s worthwhile to talk about explicitly. The word extrapolation is not the precise right one here, because it means to extend an application of something. If there was a word that combined extrapolation with adaptation, then I think we would have it, but it seems that even the vast, agile language of English has its limitations.

For writers, extrapolation means looking past the literal. It means making leaps of imagination. You cannot trust your reader to do it. The reader craves the experience of you doing it. And I believe the most important element in this is to give yourself permission to do it.

Here’s what I’m talking about. You come across a suggested writing prompt somewhere, like, “A disgraced celebrity flees high society.” You could come up with something rather literal, like a Park Avenue heiress gets busted for heroin and goes to the Betty Ford Center. Perhaps there she meets a humble laborer who will introduce her to a life of honesty and simplicity. Or perhaps to a life of exciting dirt bike racing. Or not. You could venture further and make that character a track star who gets caught filing his spikes or something, and he’s suspended from the sport. What might happen next? Maybe he coaches a junior team for a while, and learns from the kids the true meaning of integrity. You could invent a charismatic faith healer who is exposed as a phony, and who decides to exile herself for a while, and goes on a quest to test herself and to make atonement. Those are skeletons of whole stories right there. 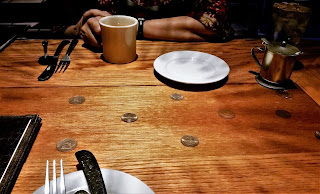 [Extra credit if you can name this restaurant, located near the shade of many large evergreen trees.]

You might observe someone across the room in a café who piques your interest. Don’t stop there. Maybe that person is watching another person. You then observe the third person. What’s going on? You decide. Who are those people? Pay attention. What are they wearing, do they seem happy or sad or something else? Maybe you can’t say why a person piques your interest. (Beyond, OK, pheromones.) That right there is reason to study that person more, and delve into your own feelings and reactions. When uncertain emotions come up, pay lots and lots of attention, and give yourself lots and lots of permission to extrapolate, generalize, adapt, and individualize.

He grabbed Mike by the head and threw him to the floor, then slammed a chair into the model of the new building, smashing it to pieces. The second chair went through the window, followed by the poly-acrylic achievement award and everything else on Mike’s desk.

I hope I’ve given you another angle of insight into how to mine and refine your raw material. Go further, go deeper, go detailed.

I love comments. Has there ever been a stranger who has somehow strongly attracted your attention? To post, click below where it says, 'No Comments,' or '2 Comments,' or whatever.


If you'd like to receive this blog automatically as an email, look to the right, above my bio, and subscribe there. Thanks for looking in. [Photo by ES]
Posted by Elizabeth Sims at 1:04 PM