When I make a mistake with language, I welcome being corrected. For instance, some time ago a reader of one of my Writer’s Digest articles let me know that I’d misused the word ‘devolve.’ I’d used it as the opposite of ‘evolve,’ as in ‘things deteriorating / falling apart / going to hell,’ basically. It really means the transfer of something to a lower or further level. When the commander got shot, control of the vessel devolved to the lieutenant commander. The house devolved to the widow. I appreciated knowing my mistake, and have not made it since.

But because many people make the same mistake I did, the wrong definition will probably become an accepted definition. Ref. my rant on descriptive-vs.-prescriptive dictionary entries in Zestful Post #103.

Not everyone appreciates being corrected, however, and this has always surprised me. I used to have a boss who asked me to proofread his weekly staff memos. One time I pointed out that he’d misspelled ‘supersede.’ He’d made the common error of spelling it ‘supercede.’ He argued with me, then finally grabbed the dictionary (pre-desktop PCs) to check. He was so angry. I’d been respectful; it isn’t as if I’d called him an idiot. This same boss also used the word prone to mean supine, and employed the phrase ‘throw the baby out with the bathwater’ when he meant ‘put all your eggs in one basket.’ I stopped correcting him after supersede, though. 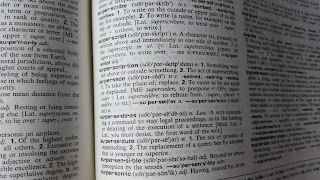 Word meanings fade and morph as cultures change, of course. I’ve noticed the phrase ‘marking time’ is increasingly used to mean keeping track of time, as in checking off the days on a calendar. Did you know it’s actually a military term that means to march in place? As such, it’s also correctly used as a metaphor for wasting time or not making progress. I think more Americans knew the meaning during and after WWII, when so many people were more familiar with military culture, either being in the service themselves or being close to a service member.

‘Penultimate’ is another good one. Many folks use it to mean like, man, super-ultimate, the livin’ end, you know? Actually it means second-to-last. Ultimate, of course, means last or final. Ultimately, we decided to go to the movies. The penultimate letter of the alphabet is Y.

Then there’s pronunciation, which is essentially hopeless. I remember pronouncing the word ‘flaccid’ correctly (flak-sid) in conversation with a friend, who began finding ways to use the same word but pronouncing it ‘flassid’ as most people do, thinking she was subtly giving me the hint that I’d been saying it wrong.

Think about it. We don’t say someone had a car assident, or has a French assent, or is essentric because he wears a derby. It’s flak-sid, goddam it.

And finally, happy birthday to my friend Special K.


If you'd like to receive this blog automatically as an email, look to the right, above my bio, and subscribe there. Thanks for looking in.
Posted by Elizabeth Sims at 12:44 PM