They Will Find You

Not long ago I was taking a walk in a nearby state park, on an overcast afternoon. The forest canopy was so thick it seemed like twilight. I heard an owl hooting and recognized it as a Great Horned, which I’ve been fortunate to spot several times wherever I’ve lived. It occurred to me to hoot back, wondering what would happen. Turns out I have a bit of a talent for owl mimicry, because the bird called again. We talked to each other back and forth a few times, then I heard these big, soft, whooshing wingbeats coming through the trees. The owl had likely decided, “She sounds sexy. I have to meet her!” Or perhaps, “I have to check out this goddam interloper.” The forest was so thick I never did get a glimpse of the owl, who I’m sure was then like, “Oh, hell, it’s just this human down there screwing with me.” But it had found me, because it had to.

And this experience brought to mind a conversation I’d had many years ago at a cocktail party with a multiple award-winning, trailblazing, fairly famous author. She had actually read some of my first work and admired it. During our talk, she mentioned that fans occasionally would show up at her house, being drawn by the power of her writing, being moved by it, feeling compelled to meet her. (It was common knowledge what city and neighborhood she lived in.) I said that must be unnerving. She said it was, because of course you never know whether the stranger is entirely stable. This was before social media and all that.

I said, “Well, I hope to get as famous as you, but I’m going to protect my privacy as best I can.”

She gave me a flat look and said, “They will find you.” 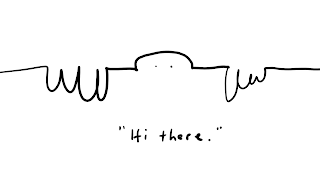 [A screwy, ghost-Kilroy, but you get the idea.]

In the many years since, I haven’t become quite as famous as she, and no strangers have shown up at my door, but indeed they have found me. Marcia and I don’t use our street address publicly (we use a rent-a-box in a nearby UPS store), but I’ve received unexpected propositions via snail mail, e-mail, and social media. One of my e-mail correspondents jokingly calls herself my “friendly stalker,” and our back-and-forths are just that, friendly. Another correspondent was pretty frank about things, and had I not already been attached, I might have been open to the possibility. There was a man of a mature age who, for a few years, turned up at my talks at conferences. He was shy and didn’t say much, but he did once tell me he came to all my events. He seemed simply to be a genuine fan who wanted to learn whatever I had to teach. Now I regret not trying to get to know him better.

On a different level, there was the convict of some notoriety who sent me a letter via Writer’s Digest magazine. He said they got the magazine in the prison library and he liked my articles a lot. Furthermore, he had decided I would be the right person to collaborate with on writing his life story. I have to say no more here except that eventually I declined. If you’re interested and we’re somewhere in person, I’ll tell you more.

Certainly, like many people, I’ve had unwelcome romantic attention on Facebook, but it’s easy to block that. When I was doing consulting work with private clients, one expressed surprise that I’d give her my mobile phone number.

And now I come to my point: You can’t control everything, and one must take risks here and there, or just sit in a concrete bunker all day. I mean, I’m not some big public figure, but even I’ve had unusual experiences. I do feel that rent-a-box gives Marcia and me some peace of mind. So, if you’re aimed at fame, you might consider that. And then, hell, just relax and enjoy the ride!

What do you think? Have you had stalkeresque experiences? Have you been a friendly stalker? To post, click below where it says, ‘No Comments,’ or ‘2 Comments,’ or whatever.
If you’d like to receive this blog automatically as an email, look to the right, above my bio, and subscribe there. Thanks for looking in.
Posted by Elizabeth Sims at 11:48 AM