That Can be a Drag

Too many writers use too many [that]s. It’s a reflex, I think, having to do with informal speech. Using [that] can become a habit in speech, almost as a placeholder, or filler.

I want you to know that these binoculars used to work perfectly, before you gave them to Timmy to play with.

You could cut the ‘that’ with no loss of meaning. Now there’s nothing inherently wrong with the word [that]—it’s a useful word:

Stop worrying about that police car behind us.
I don’t remember a thing after that.
The whispered gossip that swept through the shire made me sick.

There’s nothing even inherently wrong with extraneous thats. But they do creep into our written prose way more often than necessary, especially when used to summarize conversation or comprehension. And when you’re tasked with keeping a reader’s interest, it’s a good idea to pay attention to pace and economy, even on the most granular level. A few examples:

[So that] can get tiring as well: 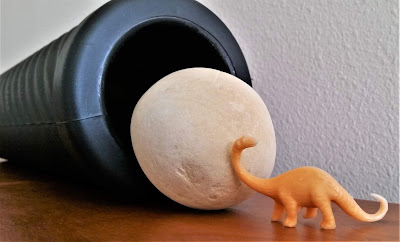 Getting rid of extraneous thats is easy and rewarding, once you know to look for them!

What do you think? To post, click below where it says, 'No Comments,' or '2 Comments,' or whatever. If you'd like to receive this blog automatically as an email, look to the right, above my bio, and subscribe there. Thanks for looking in. [Photo by ES, with special thanks to Cheetoh.]
Posted by Elizabeth Sims at 12:57 PM

Email ThisBlogThis!Share to TwitterShare to FacebookShare to Pinterest
Labels: Cheetoh, extraneous thats, grammar, orange dinosaur hero, That Can be a Drag