Saving it for Good

Until I was about 11 years old, money was very tight at our house. When you got something new to wear, you wouldn’t dream of just putting it on any old time; you’d ‘save it for good.’ That is, you’d reserve it to wear when you had to go somewhere special. If the item fell under the new school clothes category you waited until school started, then only wore it to school, never out to play. I believe some children still go out to play these days. I can’t remember, however, the last time I drove down some residential street and saw, for instance, two young guys playing catch in the street with a baseball and their mitts. Digression, sorry.

The save-it-for-good habit has been hard to break. I still tend to do it even with new t-shirts, which is insane. Another digression, but I bet you can relate.

Moving along. When I was in my 20’s I hung out with a band that played basic pop and jazz/funk at festivals and weddings here and there in the Detroit area. We were just buddies in general, and it was fun to chill with them on rehearsal nights. Once they let me play the tenor saxophone solo in the Billy Joel version of “Just the Way You Are” with them at some local festival. For that occasion, I wore a skirt and a nice top. Man, am I digressing today. But via them I met a band promoter, a very young guy, who invited me to an after-hours club in Detroit for a special show. He had managed to get three record producers to agree to come see a lineup of half a dozen bands he repped. Each band would play a short set. As we sat with drinks while the first band was setting up and the producers were arriving, he explained to me his strategy: He would lead off with the weakest group, progressing until finishing with a bang with the very best one. 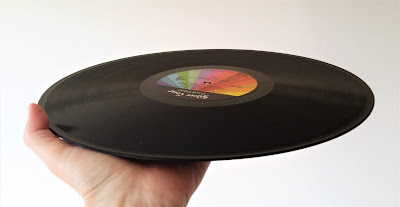 [We listened to vinyl before it was retro, didn’ we?]
“Their excitement’s just gonna keep building and building all night,” he told me confidently. He figured if he could sell even just the last and best group to one of the producers, the night would be a success.

Aaaaannnnd as I bet you’ve guessed, the plan backfired. By the time the third group took their bows, all the producers had left. I will draw a curtain over the desperate measures taken by my young, inexperienced friend to try to get the producers to stick around.

And you’ve already guessed the moral of my story today for writers: Though it’s tempting to save your best stuff for some future unleashing, it’s far better to lead off with a bang than hope to finish with one. I’m not saying we shouldn’t carefully husband our material. But sometimes saving becomes a reflexive habit. Spend it, enjoy the rush upfront, and feel secure that more good stuff will come!

What do you think? To post, click below where it says, 'No Comments,' or '2 Comments,' or whatever. If you'd like to receive this blog automatically as an email, look to the right, above my bio, and subscribe there. Thanks for looking in. [Photo by ES]
Posted by Elizabeth Sims at 12:01 PM

Email ThisBlogThis!Share to TwitterShare to FacebookShare to Pinterest
Labels: "Just the Way You Are", Billy Joel, Detroit, Saving it for Good, use your good stuff now!