I so much don’t want this to be a brag post. Because I hate reading brag posts, and so do you. I just want to make a point and give some reminder-style advice about getting everything you can from a direct experience.

The other day Marcia and I journeyed from our home on Florida’s Gulf coast to the Kennedy Space Center at Cape Canaveral to witness a bit of history: the inaugural test flight of the Falcon Heavy rocket, part of Elon Musk’s SpaceX program to improve rocket science and eventually get humans to Mars. Super big rocket, super complicated, with a fun payload of Musk’s Tesla car with a ‘guy’ in a space suit at the wheel. The launch represented a host of firsts, so although it’s a gamble to drive all the way across the state to see a space shot that could get scrubbed at the last minute, we decided to buy tickets and take the risk. (We’d observed a Space Shuttle launch for free from a grassy knoll in Titusville, but this time we wanted—apart from a closer experience—nice washrooms and the opportunity to buy and consume hot loaded nachos.)

And yeah! The launch was fabulous, but I won’t bore you with the blow-by-blow. [Delete: Yeah, first we got gas at that Chevron over by the café, then, you know, the weather was pretty nice, and like the traffic was really heavy the closer we got to the center, you know, and we tried to see the rocket from the causeway but we weren’t sure which thing sticking up in the distance was it, plus there was some haze at that hour of the morning…] Delete delete

So what’s the point of this post?
1)     To be alive to the vastness of experience.
2)     To go after it.
3)     To improve your abilities to extrapolate and synthesize. This is the piece of greatest importance for writers.

To illustrate, no blow-by-blow, but here’s a partial list of my experiences and impressions from launch day:

Cursing endlessly at the drivers who disobeyed the signs and roared ahead of us rule-followers queuing up for miles in the right lane as told. Entertaining Marcia with inventive curses. Hatred surging in my heart for people who cut ahead, but not debilitating hatred.
Is that a great blue heron? Or a crane? You’d think there’d be gators in that big ditch.
Gigantic guy in a gigantic back brace.
Smells of cooking hot dogs. Yeah, nachos. More sunscreen.
Woodstockian sea of people looking in one direction, over the roofline of the IMAX building, knowing it isn’t time yet.
Little girl in astronaut jumpsuit walking through the crowd with head high, hoping to be taken for a real astronaut.
Anxiety. T-minus keeps getting longer.
Murmurs. Shouts. Adrenaline. Tachycardia.
The brightest fire in the world! A rend in the fabric of reality!
Sonic booms, plural!! Sternum vibrations. Dude!
My God. My God. Look at that.
Face wet with tears. Friendship 7. The things imagined, the things made real.
A French fry plopping at my feet from the sky, having presumably been dropped by an overstimulated gull. 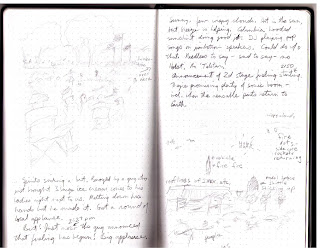 The point is, there’s so much waiting for you that you don’t expect. Space shots are extraordinary, and not everybody gets a chance to see one. But lots of other stuff happens that you can get out for and find way more than what’s front and center. City council meetings. Climb that hill, just for kicks. Ballgames. Prune that cherry tree. The movies. The lumpy blanket in the back seat. The sound of the cork popping, the cookie crumbling, the cows coming home. The look on that woman’s face when her boyfriend whispers to her. The guy on the ladder throwing a hammer to the guy on the roof. The grace of the catch! The feel of the breeze: What side of your face feels it? The young student copying the Vermeer in the museum, her easel and paints, tiny green splash on her white sneaker. The fear in that foreman’s voice. Scrape the ice off your windshield. Close your eyes. The dogs say goodnight.

When you practice feeling the whole of an experience, you can better bring detail to what you write, and you can better invent details with which to deepen your writing.

On this rocket day, I made notes in my journal, drew crummy pictures to help myself remember. Pencil shavings in the grass. Took some pictures with my phone camera. But it’s the stuff in graphite on paper that’s gonna endure. That’s the stuff you’re going to want to go back and look at. It’s so simple.

We have so much on our minds. Don’t forget to be here as fully as you can. I’m not saying anything new. But I’m saying it my way, dammit. Writers, feel it all. Say yes to it all. And capture a highlight or two. Or a lowlight. Whatever is distinct. Do it in a word, a line. Don’t stress over it. If it’s not fun, decide that it’s fun.

What do you think? To post, click below where it says, 'No Comments,' or '2 Comments,' or whatever.
If you'd like to receive this blog automatically as an email, look to the right, above my bio, and subscribe there. Thanks for looking in.
Posted by Elizabeth Sims at 2:35 PM