Our characters can open their own American Express accounts, but they need us to give them the credit they deserve for complexity and incomplete intelligence.

I told my Ringling College students the following little story last term and realized I should share it here too. I was walking through a parking lot next to a marina and noticed a couple of guys struggling with a boat on a trailer. Seems they were trying to secure it properly. The guys were the dirt-baggiest, crummiest-looking, gap-toothed pair I’d seen in a while. Ragged clothes, grimy hands, greasy hair, dangling cigarettes. The pickup and trailer were a filthy, rusty mess, and the boat looked like it might have been seaworthy when Admiral Farragut was firing on New Orleans.

Something slipped with a clunk, and one guy said, “Hey! You ass, it goes the other way.”

The first guy said, “I was speaking metaphorically.”

As God is my witness. 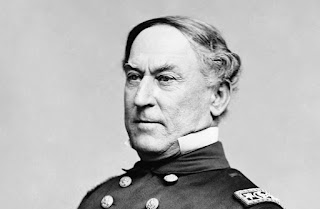 [The steely gaze, the brass buttons… what can you shout but “Farragut!”]
Too many of us, when writing characters and dialogue, oversimplify. A dirtbag kind of guy wouldn’t know the word ‘metaphorical’, let alone use it properly in a sentence, right? Yeah no, wrong. He certainly might. He might not know who Admiral Farragut was; then again he might. He might be able to calculate pinochle scores in his head, but he might waste all his money on lottery tickets. But if he does, he might not be able to bear his kids not having shoes that fit, so he starts dealing a little meth on the side, so they can wear decent sneakers. Who knows? Maybe he’s going to night school for electronics.

By the same token, a character who is smart and accomplished might not be able to chop onions properly. Might borrow money at rates only a fool would agree to. Might get a pilot’s license, then decide to keep going in the fog at low altitude because it’s only a little ways to the airstrip. Might insist on getting a prescription for antibiotics when sick with the flu.

Grab the freedom to let your characters be as complex and contradictory as the people you meet in life. Therein lies authenticity.


If you'd like to receive this blog automatically as an email, look to the right, above my bio, and subscribe there. Thanks for looking in.
Posted by Elizabeth Sims at 1:15 PM