Nearly two years ago, I wrote a post here called "To the Ballpoint," about using ballpoint pens for writing longhand. I reminisced about a TV advertisement for Bic pens, starring the Olympic ice skater Peggy Fleming, and lamented that I couldn’t find the spot on YouTube or anywhere. I recalled in rigorous detail Peggy’s thrilling performance at the 1968 Olympic games in France, her gold medal, and then the television ad where the Bic pen was strapped to her skate and given Olympic-style punishment, with Peggy spinning around as the pen point dug into the ice. Then after the ice, she takes the pen and holds the tip in a pan of fire, then writes the amazing word BIC on a large pad of paper. OK, right. I so wanted to find that commercial on line. But it wasn’t there. I googled “Peggy Fleming Bic pen TV” but—nothing. Why, God, why?
Just a few days ago, I got a notice that a reader of this blog had put up a comment on that post: “It wasn’t Peggy Fleming. It was Aja Zanova. There is a YouTube video with that commercial.”
I was stunned. Surely this could not be right. Of course it was Peggy Fleming in that advertisement. I would have bet every dime I had that the skater in that ad was Peggy Fleming. Not only had I remembered that commercial, some of my other correspondents here remembered it as well. But! I looked it up using Aja Zanova’s name, and son of a bitch if it isn’t true! Here’s the the YouTube link! The commercial starts 18 seconds in. 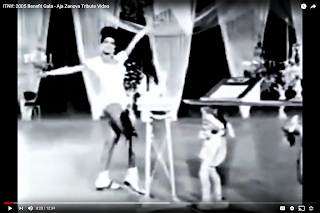 And it is exactly the commercial. The beautiful skater, wearing one of those dresses, the Bic pen strapped to her ankle, the announcer’s cheesily overexcited commentary, the ice chips flying as the pen fairly screams from the punishment. The unstrapping and holding of the pen point in the pan of fire. Everything.
Except it isn’t Peggy Freaking Fleming! Who the hell is Aja Zanova??!! Well, she was a super famous, two two-time world champion from Czechoslovakia, who skated during the 1940s and 50s. Here’s her wiki story. Thank you, dear reader MH! Thank you a thousand times for finding and sharing the truth! The mystery of the missing Peggy Fleming YouTube had been preying on my mind, just softly, in a far corner, all this time. I haven’t been able to ascertain what year the Bic pen commercial debuted. Hey, if anyone can find out that one, I’d be grateful. But isn’t it wild that right now, during the winter Olympics 2018, we get definitive word on this?
So for the past few days I’ve been thinking intensely about memory and its fickleness, and applications of same in fiction. Of course, faulty memory has long been a feature of police/crime stories, where a witness gets something crucial wrong. (Ripped from the headlines, for sure, as there are any number of real-life situations like this. Thank you, the Innocence Project.) Too often, though, I’ve seen the technique abused, where the author just bails out of a tight spot by employing faulty memory as a cheap twist.
If you’re considering using faulty memory in a story, all you really have to do is make it plausible. But what does that mean?
One, give it enough background to make the mistake believable. You could actually weave a bit of theme in there, by showing incidents of faulty memory occurring early in the story—laying some groundwork.
Two, give the person with the faulty memory a lot of depth and detail. Show us the inner thoughts of that character, show how things get twisted around. These things take time in real life, usually; let that work to your advantage here.
Three, do a bit of ‘method writing,’ drawing on the feelings you’ve had when you realized your memory about some specific event or thing was wrong.
Four, create significant fallout. A character confronted with the truth has choices. They may stubbornly believe they’re right, in spite of direct, incontrovertible evidence that they’re wrong. This can lead to an endless spin cycle of self-justification for that character, where that moment of wrongness takes over their life, making them incapable of moving forward in any honest way.
Or the realization of being wrong can lead that character to try to make amends. Or to try to create a different reality by altering evidence, or committing some related crime. Or deciding to get revenge on whoever showed them up as wrong. Lots and lots of possibilities.
I might note that a situation involving faulty memory can be significant in a plot without having to do with violent crime. It can start with something like:
You borrowed that black turtleneck from me.
No, I didn’t.
Yes, you did.
Or:
Remember when I had that idea for…?
Yeah, no. That was my idea.
No.
Yeah.
Ah, dig it! What a wonderful world of fiction--and figure skating--lies ahead! 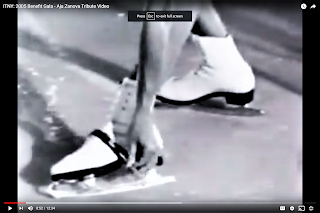 What do you think? To post, click below where it says, ‘No Comments,’ or ‘2 Comments,’ or whatever.
If you’d like to receive this blog automatically as an email, look to the right, above my bio, and subscribe there. Thanks for looking in.
Posted by Elizabeth Sims at 1:44 PM