The Humble Path to Triumph


It was, frankly, a race. Both parties got there, but Amundsen (Norway) got there first, and he and his men got back alive. Unlike Scott (England) and his. The radio hosts (unknown, just caught a few minutes) said that the main difference was that Amundsen required his men and dogs to travel 15 nautical miles per day, no matter the conditions, while Scott's party traveled more when conditions were good, less when they weren't.


The key emphasis: While Amundsen led his men out in bad conditions to make their 15 miles, he also PREVENTED his party from traveling more than 15 miles a day. By this method his men and dogs were fresher at all times. "Fifteen miles? Dudes, we're done! Let's pitch them tents and gnaw on some butter sticks!" No periods of extreme exhaustion, no anxiety to make up for time lost hunkering in bad weather.


I read up on this and found that there were more differences between the expeditions, like the plain fact that Amundsen's party was better prepared and used simpler equipment, and the fact that Scott's expedition included lots of stopping to gather scientific data, which took not just time but energy.


What all this has to do with investing I don't know exactly because I didn't hear the whole program, but I'd guess we're talking prudence and patience.


But I do know what Amundsen and Scott have to do with us writers. 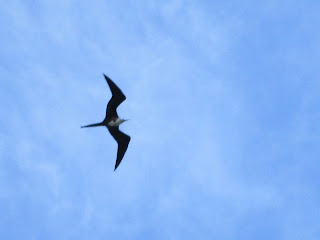 In recent years due to challenging life conditions I put off writing new fiction, waiting, as it were, for the weather to clear. It took some pressure off, but put other pressure on.


One day I woke up and realized that 1) the weather might never fully clear, and 2) it was futile to expect, or wish, for it to clear.


Under those conditions, I needed to be happy with small but steady fiction output. Once I accepted that, things flowed better, and guess what? I'm on my way to the pole. Gonna plant that flag.


How's it going with your writing? Does this story make sense to you?

[Photo info: I took this picture of a Magnificent Frigatebird at the Panama Canal.]


If you'd like to receive this blog automatically as an email, look to the right, above my bio, and subscribe there. Thanks for looking in.
Posted by Elizabeth Sims at 2:04 PM