A Quill on the Fourth

Given that I'm writing this on Independence Day for the United States, wouldn't you think my theme should be independence? Wrong! I'm a writing nerd, and there's an opportunity here, but it's not idealism.


Here's the Declaration of Independence, this image stolen directly from the National Archives web site. Have you ever seen such a beautiful job of penmanship? (The reproduction doesn't do it justice.) 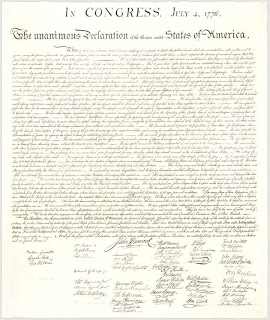 There's tons of history about the draft and the revisions and then the finished Declaration, which was famously engraved on broadsheets and distributed to the American people as soon as it was ratified by the Congress.


When I was a small child, I was given a modern reproduction, nicely printed on aged-looking heavy paper. I looked at it a lot, wondering how anybody could write that beautifully, and I decided it was because they used a beautiful pen, the feather quill.


Being a little word nerd, I developed a fascination with writing instruments, papers, and so forth, but my handwriting never looked good, and I never tried writing with a quill pen until today.


For a long time I thought that John Hancock actually wrote out the document, given that his signature was so big and bold and centered, as if he had the right to sign it so. But today I learned that a guy named Timothy Matlack, who assisted the secretary of the Congress (Charles Thomson) is probably the one wrote it out all nice and neat. Hancock simply jumped right in there, front and center, with that signature. There's a lesson somewhere in there.


I've since lost my copy of the document, but I did see that signature many times afterward: I dated a boy in school who happened to be named John Hancock. Early in life he learned to write his name exactly like the famous one—quite a feat using the ballpoint pens we all used then. I remember us checking books out of the library together once—this in the days when you had to write your name on the card that resided in a pocket inside every book's cover—and the librarian getting angry about John's signature, thinking he was fooling around. This was also in the days before student I.D.s, so John had no way of proving that was his real name. Together we convinced her, as I remember.


Upon getting up this morning, I got out a vulture feather I'd found on the golf course last year, figuring I'd make a quill pen out of it someday. I had washed it when I found it, so it was theoretically disease-free.


I looked up how to cut a quill on line, and realized if I were to do it right, I couldn't do it today, because you're supposed to let the feather soak in water overnight, then let it dry, then heat the quill end in sand that you've warmed in your oven or on your stovetop, and this will temper the quill (which I guess means make it harder), then you must get the right sort of blade to cut it with, then do your very fine cutting which cannot be achieved just right by any idiot on the first try, and gosh it all seemed totally hopeless.


So I just took my feather and my miniature Swiss Army knife and hacked a point, split it, and dipped it in some brown Pelikan ink. During coffee delivery by my loving muse, I opened a sketchbook and gave it a shot. I didn't make it through the first sentence of the Declaration, and my result looks like hell, but here it is: 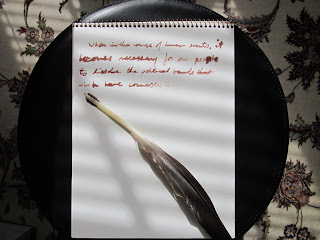 
I welcome your comments! Specifically, have you ever written with a quill? Ever wanted to? To post, click below where it says, 'No Comments,' or '2 Comments,' or whatever.


If you'd like to receive this blog automatically as an email, open it in your browser, look to the right, above my bio, and subscribe there. Thanks for looking in.
Posted by Elizabeth Sims at 10:34 AM