Night of the Living Bandanna

Buckle up for a fast rant on spelling and usage. I know the dictionaries have given up any pretense of prescriptiveness. But here at Zestful Writing, we can still mount the barricades against the onslaught of phonetic spelling and sloppy usage.

·       The side rails of a boat are gunwales, pronounced ‘gunnels.’ They are not spelled as they are pronounced.
·       I wanted to make some wine, so I stomped some grapes and let them ferment for a while. My quilting group was getting too set in their ways, so I tried to foment revolution by making a quilt from Tyvek.
·       The cheerleaders waved their pompons. This is such a losing battle. Pompon is from the French, meaning ornamental tuft. The wide usage of pompom is a result of mishearing and not bothering to look anything the hell up.
·       The wagon wheel fell off because the linchpin failed. The linchpin of Bob Hope’s comedy was self-deprecation. The word does not relate to the verb ‘lynch.’ 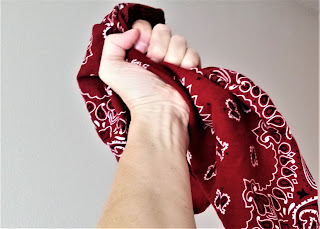 
·       The thing you put around your neck to keep the sun off is a bandanna. Many writers hesitate, then decide it must be spelled like ‘banana,’ because, well, it rhymes. No. Bandanna.
·       Although envision and envisage are similar words, few writers really know the difference. I envision that someday I might buy an RV and drive around North America. Oh, hey, I just bought an RV, and I envisage a series of trips to the national parks. Looking at it simply, to envision is to imagine something in the distant future, and to envisage is to contemplate something more immediately possible. Kind of a slippery distinction. Also, to envisage is to sort of have an opinion. I envisage Home Depot as a treacherous gauntlet that reminds me of unfinished projects.
·       Here’s a sneak peek at the finished product. It is not a covert mountain, which would be a sneak peak. The whole process piqued my interest. It did not peak my interest. When someone writes that their interest was peaked, I slam my desk in a spasm of pique.
·       One slips gaiters over one’s boots before hiking up a dusty, muddy, or covert mountain. One does not put on gators. While gators are generally docile, they don’t like to be treated so roughly. The way to remember this: you walk with a particular gait. You put on gaiters to help your walk go more comfortably.

I have more, but I feel better, so I’m gonna call it good. Do you have any peeves like these that make you seethe? To post, click below where it says, 'No Comments,' or '2 Comments,' or whatever. [Photo by ES.]

If you'd like to receive this blog automatically as an email, look to the right, above my bio, and subscribe there. Thanks for looking in.
Posted by Elizabeth Sims at 1:13 PM