Everybody Skips the Begats

When I was about 12 years old, I got into a phase of wanting to explore religion. I decided a good first step would be to read the Bible from beginning to end, because it seemed that’s the way you’re supposed to read a book. Front to back. Being an experienced consumer of novels by then, I knew that skipping ahead was a sign of weak will.

Moreover, it seemed people knew the Bible stories, but nobody ever sat down and read the whole thing straight through. Nobody I knew, anyway. My family had a so-called Catholic Bible, or the Douay version, which I somehow understood to be ‘not the real thing.’

I reasoned that checking a Protestant-issue Bible out of the library would be counterproductive, because the library only granted two renewals, and I figured that such a long book with such thin pages and such small print would take me half the summer to get through. So, with some allowance money, I bought my very own pocket-sized King James version, opened it up, and started reading. As I went, I underlined passages that seemed especially relevant with a blue ballpoint pen.

As you may know, Genesis starts off with the creation story, which is halfway decent reading. But as soon as Cain slays Abel and gets banished, we learn about Cain’s wife and kids, which, who cares? This comes around the end of Chapter 4, and the chapters are pretty short in through here. We learn about Cain’s kids, and their kids, and more generations of kids. To be accurate, though, we don’t learn about them, we just learn they got born and named.

But don't even talk to me about Chapter 5. 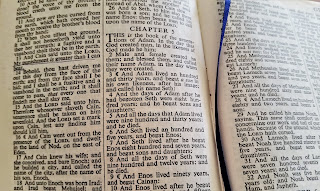 Here’s where the begats really come thick and fast. And you’re like, why? I’m never going to remember these people, I’m probably never going to see them again, and yet I have to read that they existed. The narrative picks back up again in the next chapter, featuring Noah and all his cubits, then things get sloggy again. You realize, oh, hell, Noah’s got to re-populate the planet! I am in for so many more begats.

I put the book down for a few weeks and returned to Nancy Drew. When I picked it up again I stuck with it fairly well, but stalled out once more in Numbers. Yet more begats. When I got to college and took a course in the Bible as literature, I understood things a lot better. And when I asked the professor why he didn’t make us read the begats, he just shrugged and said, “Everybody skips the begats.”

So we see time-honored lessons for authors:
·       Get right going with some action on page one.
·       If you front-load your story with characters, you’ll risk losing your reader.
·       Give every character a purpose, for God’s sake.
·       Be nice to your brother and animals.

What do you think? To post, click below where it says, 'No Comments,' or '2 Comments,' or whatever. If you'd like to receive this blog automatically as an email, look to the right, above my bio, and subscribe there. Thanks for looking in.
Posted by Elizabeth Sims at 12:56 PM

Email ThisBlogThis!Share to TwitterShare to FacebookShare to Pinterest
Labels: Cain and Abel, Douay Bible, Everybody Skips the Begats, how not to screw up your beginning, King James Version, Nancy Drew