The other day I spent some time with an old (91) but still sharp, friend. The subject of television programs came up, and we compared notes on famous shows we liked. She liked Downton Abbey, Mad Men, and a few other series with an ensemble cast of main characters and a multitude of minor characters. “And you know,” she said, leaning forward on her cane, “I notice that all these shows have three plot lines going in every episode!”

Any writer can make something of that. Simple. Three plotlines, with characters weaving in and out? Yeah! But how do we handle and plan? Here’s an easy way: Pick a focal, or center, point first. Then everything flows from there.

In Downton Abbey, for instance, it was the estate itself. They didn’t call the show “The Granthams,” which was the family’s name; they called it by the focal point, the place where everybody comes and goes, where characters have roots and history and where new stuff still happens all the time. Off the top of my head, I’m thinking of Lord Grantham’s faulty investments, Lady Mary’s unfortunate tryst with the handsome European minister, the housekeeper O’Brien’s nasty, relentless scheming.

Sometimes a show’s focal point is one main character, like Seinfeld or I Love Lucy. The action follows that character’s trials and tribulations, and the other characters’ stories interweave with that character.

Take a look at classic plays, and you’ll see the same three-plot dynamic. Looking at Tennessee Williams’s Cat on a Hot Tin Roof, we see a very neat three-plot system:

Brick and his self-destruction (with wife Maggie at the side);
Big Daddy’s dreams (with wife Big Mama supporting);
Brother/son Gooper and his expectations (with wife Mae supporting).
Three guys, three wives, three lives. And such thunderous, satisfying drama!

And the novel form (you knew I’d get to it) is perfect for the three-strand plot. Lots and lots of novels feature three or more plot strands, also known as the main plot and subplots. For writers who find the commonly recommended three-act structure confounding or too limiting, thinking about a three-strand plot this way can be a terrific portal to excellence. 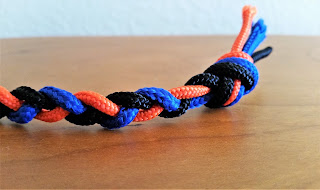 What if you’re telling a story from a single viewpoint, such as in a first-person situation, or third-person limited? Well, in my Lillian Byrd books, which are narrated by the main character, there’s always a crime Lillian is trying to solve, and there’s always a love interest—Lillian meets someone; will this work out or not?—and there’s pretty much always something going on with another significant character and their struggles in the world. Lillian is the focal point, and three or more plotlines swirl around her.

What do you think? To post, click below where it says, 'No Comments,' or '2 Comments,' or whatever. [photo by ES]
If you'd like to receive this blog automatically as an email, look to the right, above my bio, and subscribe there. Thanks for looking in.
Posted by Elizabeth Sims at 11:16 AM