For the Sake of It

The other day as I was taking a walk down the nearby parkway, a runner came along from the opposite direction. Each of us politely bent our paths to give the other extra room. I noted he was young and solidly built; not fat, but not in possession of the typical whip-thin runner’s body. I was struck by his expression, his general vibe, which I can best describe as calmly committed. I got the impression he was neither joyful nor anxious. His pace was faster than a jog, but not a lot. He seemed in a comfort zone, cardio-wise; he was running easily and showed no tension on his face or in his gait. It would seem going on this run was part of his workout schedule and this is what he was doing. Perhaps the running was to provide conditioning for a different sport, in which case the run could be considered a means to an end, or perhaps he simply very much liked to run. But whatever the case, it felt to me as if he was running for the running itself. 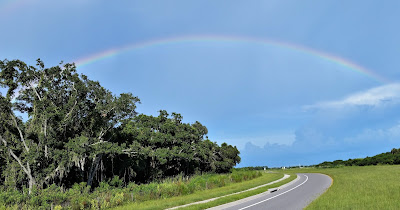 The thing I’m trying to grasp or convey is he seemed not to expect or want anything. He didn’t seem to want to be doing anything but exactly what he was doing, and he didn’t seem to be awaiting—or craving—any particular result. He didn’t seem the slightest bit self-conscious. I guess this guy struck me because I see so many people out getting their exercise with the vibe of “I can’t wait for this to be over,” or “I hope you’re noticing how good I look in my shorts and abs, cuz I work hard to be fit and I’m pretty damn proud of it.” I sometimes find myself being impatient in the pool, counting my laps and wishing for my workout to be over. I have to keep catching myself and re-focusing my attention on what matters: the feel of the water, the feel of my body slipping through it, the inner attentiveness to this moment as a moment unto itself rather than a means to an end. Paradoxically, this allows me to make minute calculations as to how I might be more efficient in the water.

There is, of course, a lesson in here for writers. In order to get the best possible fulfillment out of our path, we should not want and expect, but simply be and do. This is the Zen way, I guess; Zen in motion.

Here’s another situation I’ve given a lot of thought to, which is the question of what is worthwhile? (This next part has a church in it, but religion is not the point.) On holidays and special Sundays, I play the timpani in a big church in a retirement community in Florida; the church is well supported, and they put together musical ensembles for these special days and pay us well. I love the music director and I love playing the timps, so this is good. But I don’t do religion much, personally, and all of us musicians must stay put through three services, which of course means listening to three deliveries of the pastor’s sermon. Because we’re seated up front we cannot get out our phones and watch cat videos or argue politics on Facebook or reread Agatha Christie.

Which gives us a choice: either be bored shitless or find something meaningful to focus on. It’s not easy. Sometimes the pastor’s sermons are corny to me. Some of the congregation have dull faces. Lots of the congregation wear outfits I find incredibly tacky. But they feel good in them. They come to church, they listen, they pray, they sing. I listen too, because I might learn something unexpected, because the pastor in fact sometimes says brilliant things. I might make eye contact with a congregant and learn something there, something very subtle, perhaps. The pastor is sincere, and, like my running guy, does this thing over and over, week in and week out, for the sake of doing it, for the sake of serving his God and his congregation. All of us, even the preacher, might get bored sometimes, but everybody’s there, exposing themselves to spiritual opportunity. When it comes time to play the drums, I give it everything I’ve got, because otherwise why bother? Sometimes people come up to us and tell us they enjoyed our playing. We made a little difference for somebody that day. There’s no point wishing we were touring the world with some marquee orchestra, playing concerts on the banks of the Rhine or the Thames or Sydney Harbor. We are where we are.

If I were to nutshell this whole thing, my message for us as writers would be: Don’t waste time wishing we were sitting in a café in Greenwich Village or Paris, having intellectual conversations, after which we return to our fascinating work as high-minded writers. Let us be, really be, where we are. Let’s not skim over hours, days, years just because much of the shit we have to do isn’t giving us something we want. Because it isn’t ideal.

What do you think of this metaphysical stuff? What’s your take on working, writing, striving, serving? To post, click below where it says, 'No Comments,' or '2 Comments,' or whatever.
If you'd like to receive this blog automatically as an email, look to the right, above my bio, and subscribe there. Thanks for looking in.
Posted by Elizabeth Sims at 1:58 PM

Email ThisBlogThis!Share to TwitterShare to FacebookShare to Pinterest
Labels: Agatha Christie, church, For the Sake of It, giving it everything you've got, mystery runner, swimming, timpani, Zen