Indulge me today. Just indulge me.

I’ve brought up the name of various lords (or Lords, if you like) several times in this blog. Whenever I mention Jesus, I always get an unsubscribe notice for exactly one person. Never two, three, more, or zero. It’s funny, it happens whether I take the name of Jesus or God in vain, such as two weeks ago, when I wrote “But do you see how goddamned entertaining and enjoyable it is to read closely?”, or whether I mention Jesus or Christ in any sort of positive or neutral way, in the in the context of one of my metaphysical-type posts. No one seems to object to the mention of Buddha, or any ancient gods/goddesses I’ve mentioned, like Athena. None of the unsubscribers sends me any sort of message of explanation, but they really don’t have to, because the correlation seems so distinct. Sometimes I wonder what they’re thinking when they make the decision.

Like, “Eww, she said something about Jesus! I am so allergic to that Christian thing! Because there are so many hypocritical Christians out there who are actually fascists and everything!! Any reference to the historical Jesus is surely—somehow—an attempt to proselytize, or as a signal that proselytization is about to occur!! Bad blogger! Lemme outta here!”

Or like, “Eww, she cursed!! I am so allergic to cursing! I condemn cursing! This person is ungodly and perhaps even dangerous! I myself am devoted to clean language, and I myself will go to heaven if I keep doing things right!! This blogger and I have nothing in common! Bad blogger! Lemme outta here!”

Seriously, unsubscriber? You’ve been enjoying this blog, yet now you’re tapping ‘unsubscribe’ because—your identity is that tenuous? You have to protect your bubble so reactively that you’re foregoing the whole experience of Zestful Writing? You can’t just shrug off the bits you don’t like? Is there something I’m just not getting? 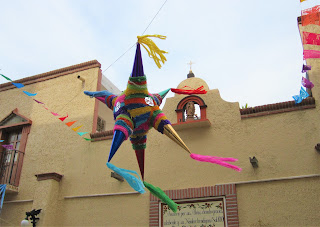 [Pagan piñata about to be busted during a Catholic festival in Mexico. Yes! Piñatas were used by the Aztecs to celebrate the birthday of Huitzilopochtli. You remember that popular war god, right?! [photo by ES]]

I swear and use vulgar language fairly liberally in real life. (If you’ve ever spent so much as half an hour with me over a cup of coffee or glass of wine, you’re like, yeah, Elizabeth, no shit.) And I put curse words and vulgar talk in the mouths of some of my fictional characters, especially my first-person ones. Why? For one thing, it’s a comfort zone, and bad language can break tension in a scene, or even add humor. And I feel it’s only honest to permit my characters to swear because I swear, and I feel it’s only honest for me to swear occasionally in this blog.

Last week, in the context of reviewing the writing app Floor 23, I wrote out a Catholic children’s prayer that came to mind. You might conclude that I was brought up in a Catholic household, and you would be right. However, my parents, apart from attending church, for years owned and operated taverns in working-class neighborhoods. And we lived in a working-class neighborhood. So guess where I learned the prayers and the curses? Right! You might wonder what I believe or practice now. My current religion, if you could call it that, seems to be a mixture of Buddhism, Christianity, and paganism, sprinkled with some vestigial Catholic devotional practices.

I know writers who swear in real life but who eschew it in their fiction because they don’t want to alienate readers. Heck, I know Jewish writers who say things like, “for Christ’s sake!” but who wouldn’t put those words into the mouths of their characters. I can understand that. I’ve lost readers because of the language I use. Some have scolded me either via email or in an online review (or both—so proud of themselves). And maybe someday I’ll launch a newer, cleaner series where nobody swears, not even the lowlifes. I shudder, but it could be an interesting challenge.

Well, I have no particular conclusion to offer here. It’s just funny how the Christian God/Jesus is such a trigger, on both ends of the offense spectrum. Funny as hell.

What do you think? Did this post make you uncomfortable? If you’re a writer, do you consciously use or avoid bad language? Reasons? I’m interested. To post, click below where it says, 'No Comments,' or '2 Comments,' or whatever.


If you'd like to receive this blog automatically as an email, look to the right, above my bio, and subscribe there. Thanks for looking in.
Posted by Elizabeth Sims at 1:07 PM