I got an email the other day from a nice fellow named Patrick Krabeepetcharat inviting me to try an evidently very new writing app called Floor 23. In his words, “Floor 23 is a super minimalist writing app that aims to maximize your creative output. As you type, you only see the last few letters you have written, as the rest floats away, to be edited later.  It's a really fun and addictive writing experience that I really hope you will try for yourself.”

That is the perfect description, I found. This morning I went over to the app and signed in with Google (other options were Facebook and email). I thought for a few minutes of some kind of story, and the words ‘guardian angel’ popped into my mind, and I thought about a lonely angel, so I started there. Within seconds I was underway. It’s incredibly simple to navigate, easy to start, and kind of hypnotic once you get going. I shifted between writing the story itself, random thoughts on the story and elements of it, and the experience of using Floor 23.

I set a goal of 300 words, and had them within about 15 minutes; I regret not having timed myself. I am sure that I wound up writing 667 words in less than half an hour. As you type, a few white letters appear on the black background and swipe away from right to left as fast as you can go. If you pause on one letter, that letter appears alone. If you pause after a space, the screen is blank. The app keeps track of your word count and that’s it. When you’re done, you can hit ‘save to clipboard’ and then paste it into a Word doc or whatever. The font is Helvetica. [edit 1/13/18: It's not Helvetica, it's Geomanist.] As you’ll see if you read through my story start, you can’t backspace over a typo; you’re forced to keep going forward. I found that annoying, but of course that’s the point. Microsoft Word automatic conventions, like auto-indent, auto-capitalize of the word ‘I’, and automatic em dash after two hyphens, do not translate. I found this annoying as well, because I’m so used to those little helps, but I realize that’s the tradeoff for enforced forward motion. Maybe future versions of Floor 23 will allow for such conveniences. 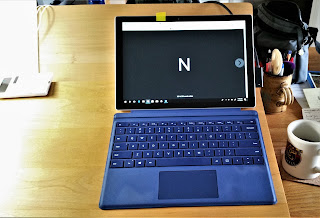 [My Microsoft Surface Pro 4 with the start of a sentence in Floor 23. I often prop the device on a slant board, which brings the screen higher and puts my hands in a fairly, though not totally, neutral position. Yes, that’s a Waffle House coffee mug, is there a problem?]

The app’s main page doesn’t tell any origin story, or why it’s called Floor 23, or who Patrick Krabeepetcharat is. It does tell how much it costs, $3 per month (always genius to create a subscription app), and it offers a free 2-week trial, “no credit card,” which I appreciated. If I’d had to enter my credit card into just to try it free, I wouldn’t have. Now here’s my writing session from an hour ago, exactly as written. After that you’ll find my bottom line on this app.

Ok, the title its Lonely Guardian Angel. I'm a guardian and i'm an angel. Walking the streets with no one to guard. This is weird, but I i get it.Once you relax into it, I think this could work pretty welll. There's no backspacing or anything , but let's see if I can make wawhat used to be known as a carriage return. New paragraph.
New graph. I remember learning the prayer for your guardian angel at my mother's knee. "Angel of God, guardian dear, to whom God's love commits me here, ever this day be at my side, to light, to guard, to rule, and to guide. Amen." That is the prayer I guess little Cahtholic kids learn when they're very young. Do young children still learn that prayer? When you'rel little, you have a guardian angel; when you're big, you can be one. Can you?
This is how I write generally, mixing random, or related, thoughts in with what ever story I'm trying to tell, or explore, or get at the heart of.Ah, I wonder how long this is taking. Man, not long. I think it's been about 10 minutes, and boy crikey, I got over 200 words. Of course, these words are sessentially trash, but in here , in here somewhere, always lies the beginning, some acorn, some seed. I was going to tell a story, but it looks like I'm exploring a character. A person--guy? Gal?who wants to serve. Not part of the Guardian Angel organization that provides security in some places, some cities--k do they still do that? I've never seen one. In real life, I'd be moving on from this stream of consciouslness about now, so yearh. What I want is to see how dialogue will work here.
"So testit out," said a little voice.
Carriage return. New line, new graph? "OK," says I.
The streets are cold and empty. It dawns o on me that I might need to find somebody to guard. I was on a bus , you know the crosstown 38 once when I thin / thought a dude might ebe a terrorist, and man, did my adrenaline surge. I got ready to defend the people on the bus from this guy, who might have had an explosive vest on. As soon as he stood up to get off--no, he stood up with meaning in his eyes and determination in his manner. I got up too, and moved toward him, cuz I was gonna do the sacfifice hug. But he just turned and got off the bus. I didn't follow him, because who knew if there was some other terrorist on the bus, ready to explode HIS ver vest.When iI know I've made a little typo, whic I Im I'm seeming to do a lot here, because somehow I feel this pressure to type fast. Invisible pressure, yes. But when a typo occurs, when typing normally, I immediately backspace to fix it, almost always. I'm thinking about all the corrections I'll need to do to this piece, or would need to t do to it if I wanted to. I can see how this app could really helop a writer keep the flow going. Whether you're a newbie or an oldbie. $3 a month? getting my abacus out I see that equals $36 per year. Maybe worth it. I do like Dragon Naturally speaking, but you need privacy to write, unless you really don't care about being overheard as you expl expose your odd fits and starts. It certainly would be possible for someone looking over my shoulder to read what's being written, though you'd really have to pay pretty close attention. So I can see this app as a possible alternative, or supplement , to ordinary typing in a Word doc, or talking into Dragon's c microphone.
The End.
For anyone who has ever doubted my bravery, ask this: Who among us would post such a piece of writing for public view?

Pros:
Enforced forward motion in writing.
Extremely simple and easy to use.
No glitches in copying text to clipboard for pasting into a document.

Con (just one):
Microsoft Word automatic conventions are not supported.
(Note: no backspace function is not a con, it’s a feature.)

Bottom line: Floor 23 is a very cool app that delivers exactly what it promises. If you don’t mind a fairly heavy edit process in exchange for enforced forward motion, this app is for you. If you’re thinking about NaNoWriMo, yeah. I might add that I, personally, would expect my raw output with this app to get better over time, as I feel more comfortable slowing down and typing with more accuracy. I intend to use it more, then decide if I want to subscribe.


If you'd like to receive this blog automatically as an email, look to the right, above my bio, and subscribe there. Thanks for looking in.
Posted by Elizabeth Sims at 1:25 PM