The Secret Life of Typos

Many a spell-check has missed many a typo. I was appalled to be notified of a typo in the first line of last week’s blog post about how missing ballpoint pens form the molten core of the earth. (Thank you, MB, KD, PR, and GC.)

It wasn’t a misspelling, it was a usage typo. In my first draft of the post, I’d written:

[Once, years ago, when I was fumbling around for a pen at work, a coworker informed me, “The core of the earth is made of molten ballpoint pens.”]

When I read it over, I decided I didn’t want ‘coworker’ to follow the word ‘work’ so closely, so I changed ‘coworker’ to ‘office mate,’ like so:

[Once, years ago, when I was fumbling around for a pen at work, a office mate informed me, “The core of the earth is made of molten ballpoint pens.”]

As you see, I neglected to change the ‘a’ to ‘an.’ Only after the post went out via email did I learn of that hideous, hideous error. If anyone had opted to unsubscribe after that post, I would have been so humiliated. Of course I edited the post immediately.

One of my correspondents tells me the free program Grammarly is helpful to catch such problems before they explode into disaster. (Have I mentioned this before?) I haven’t adopted it, though, because I’m fearful that it would pop up and annoyingly try to correct my sometimes deliberate ungrammatical usage. So, live by the self-copy-edit, die by the self-copy-edit. It’s a price I guess I’m willing to pay.

However, if you’re a first-time author who wants to self-publish a book, definitely get a professional copy edit before hitting that upload button. You don’t want to give your audience any extraneous reasons to be disappointed and look away. If you get a professional copy edit but the copy editor finds no corrections to make, you will be a first among writers, and you should leave your brain to science. 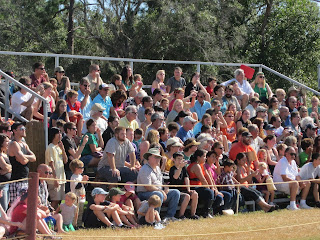 This is pretty much the kind of audience attention you want. These people were watching two guys try to kill each other.

Also in last week’s post I used the word ‘incroyable,’ which was not a typo, but is French for incredible or amazing. Given that I was talking about the Olympics in France, I thought it appropriate. Further down the page I mentioned Parker’s Quink Flow ballpoint cartridges. Quink was the brand name Parker initially used for a new quick-drying bottled fountain-pen ink. Now they use it for everything, including cartridges. Why, God, why? BTW, Quink is an example of a portmanteau word: quick and ink. Gonna run my spell-check now.

Weirdly, I found an inexplicable copy error in the most recent editions of my first novel, Holy Hell. I was reading through, making pronunciation notes for the vocal artist who will be voicing the book for Audible, when I found the word softball capitalized in the middle of a sentence, as if it were a proper noun. It occurs in both the Kindle and paperback Create Space versions. It did not occur, I found, in the first edition paperback published by Alyson Books; I have no idea how it came to be capitalized in the current versions, which I went over with fine attention. And over and over. I found a few other minor errors in the other books, mostly formatting mistakes: a missed indent or such. Haven’t fixed those yet.


If you'd like to receive this blog automatically as an email, look to the right, above my bio, and subscribe there. Thanks for looking in.
Posted by Elizabeth Sims at 12:24 PM

Email ThisBlogThis!Share to TwitterShare to FacebookShare to Pinterest
Labels: Grammarly, new blog post, spell check, The Secret Life of Typos, the value of getting a copy edit, two guys trying to kill each other