Learning from the Vagaries

I've looked back through my blog and am surprised to find I haven’t shared the story of the genesis of Left Field. I kind of can’t believe it because I've told it a number of times to audiences, as a parable about the vagaries of connecting with readers.

At the 2010 Left Coast Crime convention I found myself on a panel called “Writing Gay Characters”, along with Laurie King, Christopher Rice, L.J. Sellers, and moderator Pat Brown. We’d been scheduled for 8:30 Saturday morning, the godawfullest time slot of any convention, due to the fact that everybody’s either hung over or sleeping in from Friday night carousing.

So we all straggle in with our Starbucks, and lo and behold about 30 people came to hear us. While all of us had written GLBT characters, it seemed that Chris and I were the only authentically queer authors on the panel, so we more or less hijacked the discussion. Come question time, someone asked, “What do gay and lesbian readers want? What are they looking for in the novels they read?” 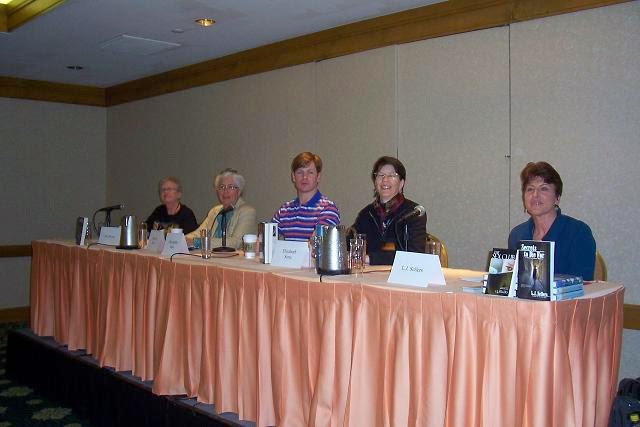 Chris gave an intelligent answer based on his experience, then I decided to speak aloud something I’d been turning over in my mind.

I talked about having used a women’s bar for the setting and focus of my first novel, Holy Hell, and then setting Damn Straight at ‘the Dinah’ (as it was popularly known), an LPGA golf tournament and magnet for thousands of lesbian fans and revelers. (When I attended the tournament to do research for the book, accompanied by Marcia, we passed some time in a breakfast restaurant with another diner, who related tales of the parties she’d attended the night before. When we mentioned we were on our way to watch the day’s round of golf, she said blankly, “There’s golf?”)

Both of those books were well received by critics and readers. But, I related, I did hear from some readers who told me they wished somebody would write books that weren't necessarily set in some major lesbo-scene, but simply featured a lesbian protagonist going about her business in an ordinary setting, solving crimes or whatever.

OK, I thought, I’d like that too. So I wrote Lucky Stiff, in which protagonist Lillian Byrd solves the mystery of her parents’ long-ago deaths, with the help of her childhood gay-guy friend Duane. Then I wrote Easy Street, where Lillian brings to justice a cute little thief and murderer, with the action ranging all around the U.S.

Reviewers with good literary taste loved the books and understood the essentially subversive, unconventional nature of my writing. “Her best yet!” they chorused. But guess what? The books didn't resonate so well with my general readership, many of whom chorused, “She’s lost her way!” Sales lagged.

“So the lessons I learned were several,” I told my audience in Los Angeles that morning. “One, what readers say they want and what they really want might be two vastly different things. Two, an author should be chary of trying to accommodate readers’ requests anyway. And three, my next Lillian Byrd novel absolutely has to be about—” I paused for dramatic effect, “—softball!”


If you'd like to receive this blog automatically as an email, look to the right, above my bio, and subscribe there. Thanks for looking in.
Posted by Elizabeth Sims at 2:17 PM