A bit of pre-new-post business:

Frequent Zestful blog commenter Lidy Wilks is also a blogger in her own right. (And a highly accomplished one, too!) She sent along this Very Inspiring Blogger Award, which has become somewhat of a phenomenon on the Web. Lidy received the award from another blogger, who received it from another blogger, and so on back to 2009, when Cathe Holden came up with the idea for bloggers to honor other bloggers. And now Lidy has very generously honored me with it.
When you receive this award, 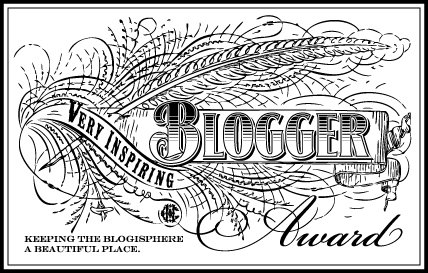 the protocol is to:

1) Thank the person who nominated you and include a link to their blog. Thank you, Lidy! (Lidy Wilks)

2) Send the award to other bloggers you admire, and put their links on your blog. Apart from Lidy, I follow Seth Godin and Jane Friedman, both of whom have received this award numerous times. It is slowly penetrating my brain that the current custom is for bloggers to list the blogs of others on the sidebar of their blog site, thus helping propagate worthy blogs, blogs, and more blogs. Perhaps I will do this someday.

3) The third requirement varies, depending on whose blog you’re looking at. Some bloggers tell about what inspires them to write, other tell seven random facts about themselves, some list their fifteen most disgusting sexual fantasies, etc. I will say that I was inspired to write novels by reading bad novels and knowing I could do better. A random fact about me is that I like to ask guys to tell me about fistfights they’ve been in. One more random fact: I would like to ride a horse or motorcycle across the Mongolian steppes someday. A particularly disgusting sexual fantasy of mine involves pygmy goats and Diet Pepsi.

We'll call this one:

So last week, I wrote about my self-funded book tour for The Extra, which resulted in some nice things, but not enough sales in subsequent months for Macmillan to commit to publishing mass-market paperbacks.

As of this point I had turned in the third in the series, On Location, and could look forward to a hardcover release of that. But then…

I phoned Cameron and said, “What do we do now?”

“What’s your idea for a fourth book in the series?” she asked.

She said a mild curse word.

“Well, I was hoping it wouldn’t be a very good idea, and I’d just tell you to forget it and write something totally different—start a new series. But that’s a great story for Rita.” We discussed how hard it is to jump a series from one publisher to another, unless your sales are already stratospheric. But Cameron said, “If you’ll write a detailed outline and the first three chapters, I’d like to take a shot at selling it.”

“Yeah. It’s an outside chance, but I really want to try.”

So I took a few months and wrote up the material. When Cameron and I decided it was wonderful, she set to work. This was by now somewhere in 2010.

“The bad news is none of the other big six wants to take on the series. But the good news is, four of them said, ‘We’d love to see something new from Elizabeth.’”

The second half of a phone call like that is supposed to make your day. And it pretty much did for me. But while I was putting out the first three books in the Rita Farmer series, the digital publishing revolution was thundering along. People like Joe Konrath were making a killing self-publishing on Amazon and writing about it and turning down six-figure deals from their old publishers, and author friends of mine who had self-published were urging me to get my rights back and reissue my books myself, and self-publish any new ones.

So I set about doing that, keeping the idea of something new for New York in abeyance.

Meanwhile, after the first four Lillian Byrd books were published, around 2005, I’d begun writing for Writer’s Digest magazine, doing features on how to write well, and teaching live webinars.

Also, meanwhile, the thing started to happen to me that happens to all legit authors, which is whenever somebody asks you what you do and you say, “I’m an author,” they say, “Oh, I want to write too!” or “I’ve written a book, but I haven’t been able to get it published. Will you help me?” Doubly so when they find out I write for Writer’s Digest.

My articles in the magazine were supposed to address that, but I got tired of telling people, “Get a copy of Writer’s Market, like I did. Read it and get busy.”

I started to get an idea for a new book, this one nonfiction. As you can see, I had a lot of balls in the air. More next week.


If you'd like to receive this blog automatically as an email, look to the right, above my bio, and subscribe there. Thanks for looking in.
Posted by Elizabeth Sims at 2:13 PM