Achieving an effect: that's art. A writer has to think about this stuff just like a painter, for instance. If a painter wants to paint a molten orange sunset, you bet she's going to focus on that orange. Naturally. A beginning painter would simply open a tube of orange paint and slather it on in a circle. A painter who has really taught herself to see, will start with a base of perhaps white, then add yellows and reds and maybe some brown, blue, or green. Since if you really look at anything, even a molten sun, it's not all one completely even color.

A real example: One of Vincent Van Gogh's self-portraits. The picture looks lively, vivid, real, honest. Yet if you look closely, 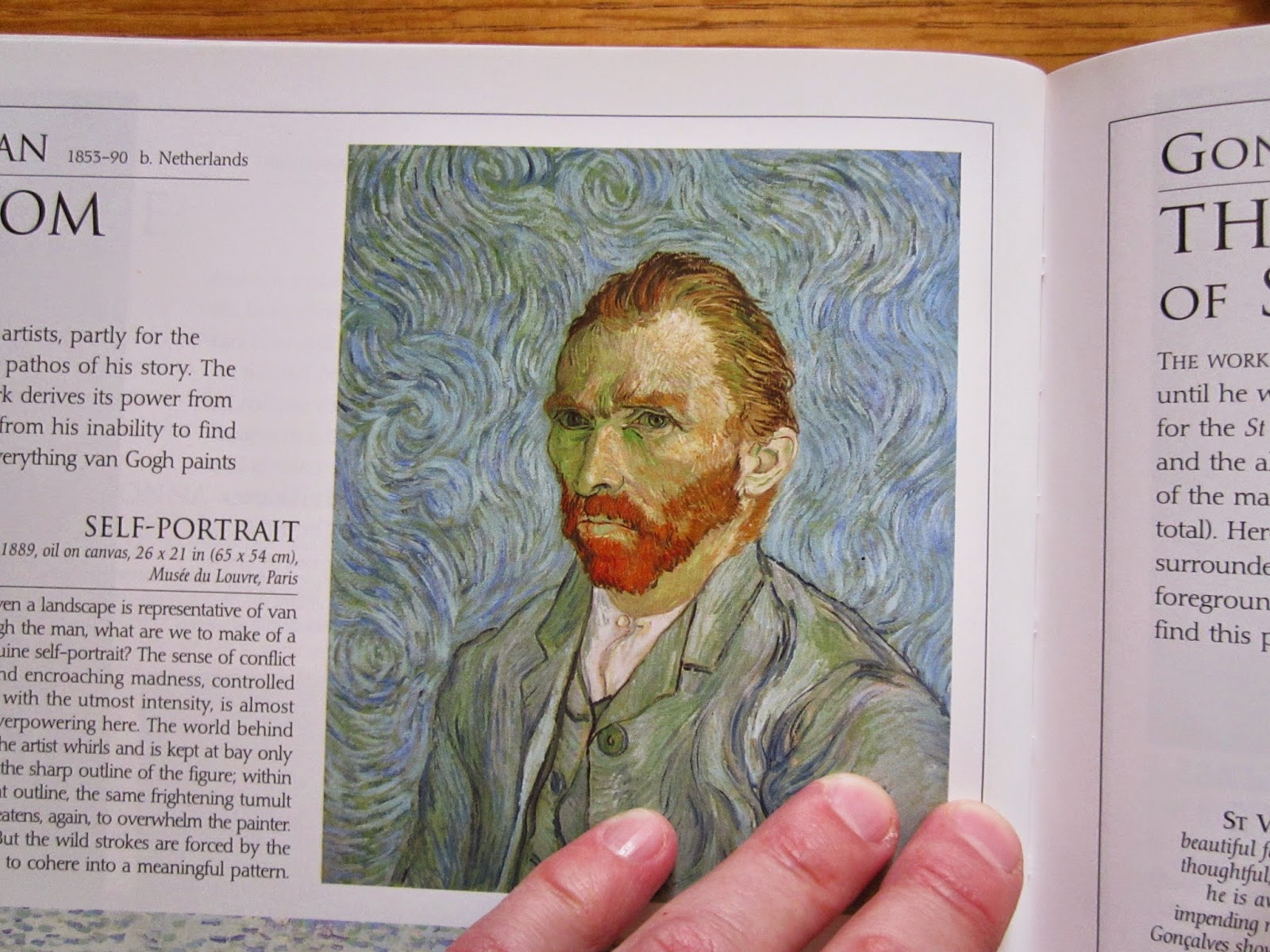 there are streaks of green paint in his beard. (You can see it better in the original in person; this is just to give you the idea.) Well, his beard hairs might have been a mix of reddish, brown, and maybe even a little gray. But green? Why does the picture look so great? Maybe because Van Gogh looked at the world with fine attention. He saw that light reflects off of just about every surface, and colors change as the light changes. Shadows aren't black; they're blue, brown, olive. (Note on copyright: I took this photo of a page in a book. Because the photo is an image I created, I own the copyright. If I captured an image of a Van Gogh painting from the Web, that image might be copyrighted by somebody else. So basically: If you take a photo, it's your property, and no trouble ought to come of your sharing it.)

The observer of that finished painting doesn't go, "Hm, I think the artist began with a base of umber wash; no, maybe a dull white—and then he added the umber, some yellow, then maybe some vermilion, and maybe—do I see a trace of ultramarine?" No. Unless the observer too is a student of art, or a passionate artist who sees and understands art technique, they're just going to go, "Man, that is one intense, energetic picture." And they have a feeling that the artist gave it everything he had.

When a good writer sets out to represent a character or a setting or a story, they take the trouble to conjure it mentally, first, as clearly as possible. Then they look, listen, smell, taste, and feel deeper, then they go about writing. This takes time. But the result is writing that feels more alive on the page than the reality that might meet the reader when they look up from that page. And that is known as a tour de force.

Post a comment now. Click below where it says, 'No Comments,' or '2 Comments,' or whatever.
If you'd like to receive this blog automatically as an email, look to the right near the top. Thanks for looking in.