[This week’s blog is a meaty excerpt from my article in the current Writer’s Digest magazine, February, 2019.]

I didn’t know it, but I was mentally ill until about age 16. Anybody queer was considered mentally ill until 1973, when the American Psychiatric Association removed the diagnosis of homosexuality as a disorder (though ‘sexual orientation disturbance’ endured in the DSM until 1987). Like millions of LGBT children and adults, I knew I was different, and not in a socially acceptable way. We didn’t even know there were millions of us. We thought maybe we were the only one.

Back then, a person who wanted or needed to explore the queer lifestyle had to be extremely circumspect in their hunt for information and validation. The words queer, fag, homo, and lezzie were dreaded slurs, used by even young children who didn’t know what the words meant.

The word “queer,” however, has emerged as an acceptable term for any kind of alternative sexuality or sexual orientation. LGBT, which stands for lesbian, gay, bisexual, and transgender, is the clunky yet useful initialism that surfaced in the 1990s. The addition of Q, meaning queer, includes pretty much any sexual/gender variation, including intersexual, asexual, cross-dressing. Not everybody agrees to these shorthand helpers, but in the interest of simplicity, I’m using queer here as an all-inclusive term.

Enter literature. You figured maybe there were books that captured the experience, right? So, alone, you hunted through library card catalogues and the stacks, looking for something—anything—to read. If you didn’t feel safe bringing a book to the librarian to stamp and check out for you, you stood in the stacks and read it there, shifting from foot to foot, ready to jam the book back into the shelf if anybody came by. Whatever books, that is, you could find.

What is queer literature? Basically, anything in which the main character or characters are queer, and where a queer lifestyle is featured, where queer concerns are addressed. Coming-out stories were, and remain, popular.

Why is queer lit even a thing? Because people are tribal; readers are tribal. We like to read about characters who reflect us because it’s a way we can learn how to deal with life and its challenges. Queer readers had been mentally editing / head-editing the novels they read for years, changing one character or another’s sex in their minds. Highly unsatisfying—and totally beside the point of queer existence.

The roots of modern queer literary themes can be found in classical mythology. Some of the gods enjoyed emotionally close relationships with male pals, for whom they would kill or commit vengeful mayhem. Apollo, especially, was quite close with Carnus, Hyacinth, and Cyparissus. Herakles (or Hercules) cared deeply for Aberdus, Hylas, and especially Iolaus, who helped Hercules prevail against the multi-headed Hydra.

Moving forward in time we find the Satyricon (1st century A.D.), a fictitious work by the Roman courtier Gaius Petronius, and The Tale of Genji (11th century) by Murasaki Shikibu. These works included frank depictions of male/male relationships, after which queer themes more or less went underground—that is, they were disguised or hidden in story elements, for centuries. An example can be found in Dracula (1897) by Bram Stoker, when Count Dracula seizes Jonathan Harker with the cry, “This man belongs to me!” In the seafaring novel Billy Budd, begun in the late 1800s by Herman Melville and first published in 1924, there’s a possible homosexual triangle involving Billy, Claggart, and Captain Vere.

Queers hunting for a literary hero might have come across Oscar Wilde (1854-1900). You found a career of literary talent and accomplishment, but then you looked into his life, and wow. “Gross indecency,” they called it. Prison time, they gave him. He died penniless.

Women interested in exploring same-sex relationships had to look harder, and there wasn’t much to find. You had the fragmentary poetry of Sappho (c. 630-570 B.C.). Maybe you came across Radclyffe Hall’s depressingly-titled The Well of Loneliness (1928), wherein the main character, Stephen Gordon (a woman), is arguably suicidal by the end, though she doesn’t quite get around to it onscreen, as it were. 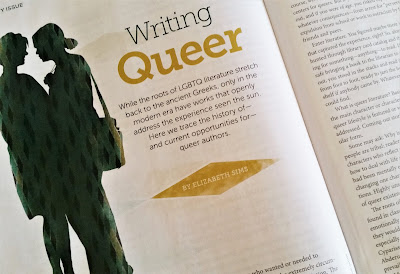 Then maybe you read about Gertrude Stein and Alice B. Toklas, guardians of the Paris avant-garde in the Jazz Age. Well, what was that relationship about? Hm. Super hard to tell. Then you read Ernest Hemingway’s A Moveable Feast and you came across a little passage of dialogue that appears to record an overheard quarrel between two lady perverts. Great. Just great.

Sadly, due to cultural standards and expectations—we were all mentally ill, remember?—the queer characters had to die, or more ideally, kill themselves out of shame. Lovely.

A few examples out of hundreds:
Carmilla (1871-72), the title character in Joseph Sheridan Le Fanu’s serially-published novel;
Martha Dobie in The Children’s Hour (1934), play by Lillian Hellmann;
Sebastian Venable in Suddenly Last Summer (1958), play by Tennessee Williams (among other Williams characters who get killed off or at least humiliated for being different);
Brig Anderson in Advise and Consent (1959), novel by Allen Drury.

In mid-century American queer literature, Tennessee Williams keeps cropping up, especially with his play Cat on a Hot Tin Roof (1955). The gorgeous character Brick doesn’t love his wife, the equally gorgeous Maggie—why not? There was this guy, this football teammate of Brick’s named Skipper. Brick and Skipper. Something there. But what, exactly? Maybe even they didn’t know. Skipper killed himself. OK, yeah. Read between the lines, friend.

Many good writers wrote closeted—about sexually ambiguous characters, with some between-the-lines stuff in there. Truman Capote and his Other Voices, Other Rooms (1948) might be an example. Patricia Highsmith edged into queer themes with her series of five books (1955-1991) featuring the character Tom Ripley, who appears to at least be bisexual, if not homosexual. She wrote a frankly queer-themed novel, The Price of Salt (1952) early in her career, but under the pseudonym Claire Morgan.

Contemporary queer lit is inextricably tied to the gay pride movement that ignited with the Stonewall uprising in New York City in 1969, named after the bar where members of the queer community rebelled against the police, who routinely raided such places and racked up arrests on ‘indecency’ charges and other crimes. Stonewall was a watershed moment that led to the LGBT rights movement.

Rights were fought for, rights were gradually won, and queers could come out a little more. There we were, blinking in the sunlight. More visibility meant more opportunity to get queer literature out there.
[End of excerpt. For the full article, which discusses the emergence of modern queer works as well as the current scene, hustle out to your local newsstand or go to www.writersdigest.com.]

What do you think? To post, click below where it says, ‘No Comments,’ or ‘2 Comments,’ or whatever. If you’re having trouble leaving comments on this or other blogs, it’s probably because third-party cookies have been turned off in your browser. Go into your browser settings and see if that’s the case. Then turn them on again in order to leave comments.
If you’d like to receive this blog automatically as an email, look to the right, above my bio, and subscribe there. Thanks for looking in.
Posted by Elizabeth Sims at 1:06 PM